Once again the BBC failed to meet its obligations to audiences.

The lead item in the August 15th evening edition of the BBC World Service radio programme ‘Newshour’ was described thus:

“Israel is blocking two US Democratic lawmakers, who are prominent critics of the Israeli government, from visiting.”

Presenter Julian Marshall introduced the item (from 00:10 here) as follows: 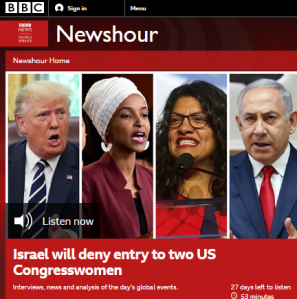 Marshall: “And we begin today with that decision by Israel – supported by President Trump – to bar entry to two US Democratic Congresswomen, Rashida Tlaib and Ilhan Omar, who had been planning to visit the Palestinian territories. But Israel has said they won’t be allowed in because of their support for the international movement that urges a boycott of Israel, known as BDS. In 2017 Israel passed a law banning entry to foreigners who support a boycott. Newshour has repeatedly asked the Israeli government for an interview. They’ve instead given us a statement. ‘Congressmen Tlaib and Omar’, the statement says, ‘are leading activists in promoting the legislation of boycotts against Israel in the American Congress. Only a few days ago we received their itinerary for their visit in Israel which revealed that they planned a visit whose sole objective is to strengthen the boycott against us and deny Israel’s legitimacy’. Well in a moment we’ll be speaking to an Israeli journalist but first let’s get the reaction of Hanan Ashrawi, who would have been hosting the two Congresswomen in the Palestinian territories.”

Listeners were not informed that Ashrawi is a member of the PLO executive committee as well as the founder of ‘Miftah’ – the controversial NGO that organised and part sponsored the proposed trip. Neither were BBC audiences told that the person “who would have been hosting the two Congresswomen” was herself denied a visa to the United States earlier this year.

Ashrawi: “I think this is absolutely preposterous and unacceptable. I mean they are denying entry to representatives of another country; I mean their ally, the US. These are Congresswomen who are coming to Palestine, not to Israel. They are coming to reach out to the Palestinian people, to see how things are on the ground and the reality of the occupation. And now Israel gives itself the right to bar them from coming to Palestine, to ban them from entering and the same time to impose a blackout on Palestinian realities in order for them not to find out the truth. This is not acceptable and I believe that this is as affront to the American people and to the representatives themselves. But unfortunately Donald Trump, the president, [laughs] was inciting against them and he was telling the Israelis not to allow them in.”

In fact the Congresswomen’s itinerary included a day two tour of “Al-Aqsa mosque, the Church of the Holy Sepulchre, Western Wall and other historic sites” in the Israeli capital Jerusalem. Marshall made no effort to clarify to listeners that, as the BBC itself states, “[t]here is no independent state of Palestine today” despite Ashrawi’s repeated references to that non-existent entity.

Likewise making no effort to inform audiences of the fact that the BDS campaign promotes the so-called ‘right of return’ for millions of descendants of Palestinian refugees (which would lead to the elimination of the Jewish state and thereby deny the Jewish people their right to self-determination) Marshall went on:

Marshall: “But Israel would argue that it has a 2017 law that bars foreigners from entering the country who support a boycott of Israel and they [Ashrawi laughs] would argue that that is what these two Congresswomen have been doing.”

Israel of course does not have to “argue” that Omar and Tlaib support the BDS campaign: they have made that quite clear themselves.

Listeners next heard a series of plainly ridiculous claims from Ashrawi concerning Israel and the 2017 amendment to the ‘Entry to Israel law’ which enables Israel to deny entry to people who advocate for a campaign that the BBC serially refuses to accurately portray to its audiences.

Ashrawi: “Well the thing is, Israel cannot tolerate dissent or differences of opinion. There are many people who…who adopt this. There are many people who think that Israel should be held accountable. This is something that is universally acceptable so Israel cannot legislate in order to violate international law and human rights. And Israel now thinks that not only is it above the law and it can do whatever it wants with the occupation, it wants to enjoy full impunity and it wants to punish those who want to hold Israel accountable and act in accordance with their conscience.”

Marshall: “Is this another reason for the Palestinians not to engage with the Trump administration?”

Ashrawi: [laughs] “I can’t think we need another reason. I think that the Trump administration has taken illegal, unilateral measures on the issues of Jerusalem, on the issues of refugees, on the issues of funding the Palestinians, on the issue of punishing the most vulnerable segments of our population and of course while refusing the two-state solution, the ’67 borders, by refusing to acknowledge the fact of the occupation itself. So they have effectively violated every aspect of international law pertaining to the Palestinian question. So in a sense I mean there’s nothing left to do other than incite against their own nationals, against the representatives of the American people. An American president is telling a foreign country not to admit members of his own Congress [laughs]. I mean this lacks any sense of logic or political responsibility or respect for his own people even. Certainly we said the moment that they decide to treat us as equals and to respect international law, then of course we are willing to talk to them. But since they are violating the law and violating our rights, there is no reason to engage.”

Failing to clarify to listeners that the US administration has not ‘refused’ the two-state solution and that there is no such thing as “’67 borders”, Marshall closed that completely unchallenged propaganda rant.

Despite the BBC being obliged to provide its funding public with “impartial news and information to help people understand and engage with the world around them” its coverage of this story (see ‘related articles’ below) has been characterised by a complete failure to supply audiences with relevant information concerning the political NGO that organised the trip and the BDS campaign which the two Congresswomen support.

Although, given her record, it was patently obvious that BBC World Service radio listeners were not going to hear any objective or informative comment from Hanan Ashrawi, ‘Newshour’ producers nevertheless sought out her ‘contribution’ and Julian Marshall’s failure to question any of her numerous outlandish claims and statements ensured that the BBC once again failed to meet its public purpose.