Yolande Knell portrays the method used to carry out a terror attack as 'unusual' even though it happens regularly.

Back in November 2012 a BBC TV presenter told viewers that Hamas was ‘only’ firing “home-made contraptions” at Israeli civilians.

During the conflict in the summer of 2014, BBC Jerusalem bureau correspondents repeatedly described the missile arsenals of the Gaza Strip based terrorist organisations as “homemade rockets”.

“The obvious intention is to steer audiences towards a view of these weapons as being crudely and simply made, with the implication that they are ineffective and do not present such a dangerous threat to Israeli civilians.”

Five years on, BBC audiences were told of a “homemade” improvised explosive by one of the same BBC Jerusalem bureau correspondents in the August 24th edition of BBC Radio 4’s ‘Midnight News’ (from 17:23 here). 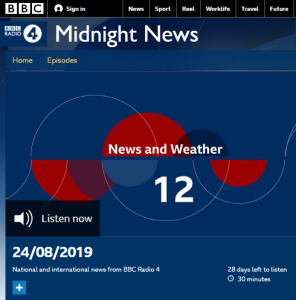 The newsreader began by framing the story according to BBC editorial policy – i.e. by failing to describe a violent politically motivated attack on civilians as terrorism and by using politically partisan language to portray a geographic region. [emphasis added]

Newsreader: “An Israeli teenager has been killed and her father and brother injured in a suspected Palestinian militant attack near a settlement in the occupied West Bank. The Israeli military says an improvised bomb was used. From Jerusalem, Yolande Knell reports.”

Yolande Knell chose to use the Arabic pronunciation of the name of an Israeli city and – in line with BBC policy throughout the past 18 months – to portray violent rioting that included the throwing of explosives, grenades and Molotov cocktails as “protests”.

Knell: “As the funeral took place for seventeen-year-old Rina Shnerb in the central Israeli city of Lud [sic – Lod], her father – a rabbi – and older brother remained in hospital, being treated for their injuries from the explosion. In the hilly area of the West Bank, Israeli soldiers searching for the girl’s killer have blocked roads leading to Palestinian villages. Unusually, a homemade bomb is said to have been used. It’s thought it was planted close to a natural spring in a popular hiking spot and detonated as the family approached it. There’s been a recent rise in Palestinian attacks – several linked to the Islamist movement Hamas – raising concerns about a possible upsurge in violence ahead of next month’s Israeli elections. In Gaza, where there was a large turn out for the regular Friday protests along the border fence with Israel, the Hamas leader praised the latest attack in the West Bank but didn’t say whether his group was responsible.”

Since the beginning of this year the Israel Security Agency has recorded monthly use of improvised explosive devices and pipe bombs in attacks carried out in Judea & Samaria and Jerusalem:

Since the BBC has refrained from reporting the majority of those attacks (with four of those seven months seeing no reporting on terrorism against Israelis whatsoever) it is hardly surprising that Yolande Knell portrays this latest attack using an IED as being ‘unusual’.

As for Knell’s claim that the device was “homemade”, the Times of Israel reports that:

“The army said an improvised explosive device was used in the attack. Police sappers determined that the bomb had been planted earlier at the spring and was triggered remotely when the family approached it. […]

Channel 12 quoted unnamed officials as saying that the size and complexity of the device indicated that one of the major terror groups was behind the attack.”

Channel 13’s military correspondent Alon Ben David reported that the IED weighed between three and four kilos and contained a large amount of shrapnel, adding that the incident was “planned and organised – and not a spontaneous or improvised terror attack”.

Yolande Knell’s use of the term “homemade” does not convey that information to BBC audiences and – as was the case when she used it in 2014 – downplays the gravity of events.