A politically motivated narrative is advanced by the omission of key context.

On September 17th BBC Culture published an article by freelancer William Ralston titled “The rise of Palestinian pop”. In among Ralston’s long portrayal of the Palestinian (and not Palestinian) music scene readers were served context-free political framing. The article opened by telling readers that: [emphasis added] 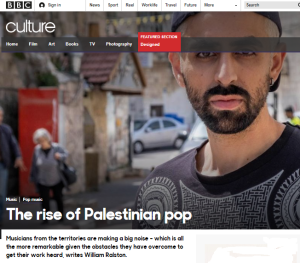 “Growing up in East Jerusalem, Bashar Murad turned to music for comfort in a life blighted by fractious political realities and the emotional pressures of being a gay man battling the conservative elements of his society. It also became a way of transcending the borders imposed on his life by the Israeli occupation; a medium to connect with the world outside.”

As noted when he was previously featured in BBC content, despite those alleged “borders imposed on his life” Murad:

“…was educated in an American school in Jerusalem, attended Bridgewater College in Virginia [USA], and had his work sponsored by the United Nations’ Men and Women for Gender Equality program.”

None of that was however mentioned by Ralston, who went on to promote the notion of “Palestinians with an Israeli passport” even though the majority of Israeli Arabs do not self-identify as Palestinians.

“Since its launch four years ago, the spot has become a second home for Palestinians with an Israeli passport or those with documents allowing them to travel through Israel.”

“In cash-stripped [sic] Gaza, the smaller Palestinian territory, there are even fewer opportunities. Recording studios are scarce, and any equipment must be sourced from Egypt or Israel at an extraordinary premium. Hamada Nasrallah, vocalist for Sol, a seven-piece folk outfit from Gaza, explains that he had to sell off his possessions just to afford a guitar, only for it to be destroyed in the August 2018 Israeli bomb attacks on the Said al-Mishal Centre.”

Not only does that promoted link lead to a politicised and partisan report from the Guardian but readers were not informed that the ‘cultural centre’ was located in a building also used by Hamas’ interior security unit or that the strike came in response to over 180 missile attacks from the Gaza Strip against Israeli civilians.

The article failed to inform audiences that the reason why the population of the Gaza Strip suffers from a lack of electricity and clean water is internal feuding between Palestinian factions.

“The electricity shortages and lack of drinking water make it “hard to focus on music” because “we don’t have the basics to live”, MC Gaza, a local rapper, says. “

The writer’s failure to mention the decades of terrorism perpetrated by Hamas – which he euphemistically described as “the Islamist organization that governs the territory” – means that readers are unable to put his subsequent descriptions of restrictions on movement into their correct and full context – including the fact that in the week before this article was published 8,673 people used the Erez crossing.

“Exacerbating the problem are the restrictions on movement that Palestinians face, which means that many cannot travel abroad for gigs, or, significantly, meet with industry professionals. Special permits are required to enter Israel, which are rarely granted, especially not quickly. Palestinians have long had no access to airports in the Palestinian territories: those in Jerusalem and Gaza ceased operations around the turn of the millennium, so most Palestinians must travel to Jordan in order to fly anywhere, which costs around US$500 (£400) one-way.

Those in Gaza have great difficulty in travelling at all. There are only two crossings out: Rafah and Erez, controlled by Egyptian and Israeli authorities respectively. […] Erez, meanwhile, is also tricky, and, for reasons of security, only Israeli-defined categories of people, mainly those requiring urgent medical attention, are eligible for a permit. Permits are also granted to businessmen, students, and artists, but they are far from guaranteed…”

As is usually the case in BBC content, history in this article began in June 1967, with no mention of the fact that parts of Jerusalem were illegally occupied by Jordan in the 19 years that preceded the Six Day War or that Jordan chose to attack Israel in that conflict.

“The position of those born in Jerusalem is uniquely complicated. After occupying and annexing East Jerusalem following the 1967 Six-Day War, Israel offered Palestinian residents Israeli citizenship but many refused, and instead took permanent residency, allowing them to live, work, and receive benefits in Israel. They have what’s called a ‘laissez-passer’, a travel document that allows them to pass through Israel, but they cannot pass into another country without a visa, which is hard to obtain because they don’t have any citizenship.”

The same lack of historical context appeared in a section in which Druze residents of the Golan Heights were described as ‘Syrian’ and the relevant factor of the closure of the Quneitra crossing because of the civil war in Syria was erased.

“Musicians in the Golan Heights face similar difficulties for the same reasons: Israel annexed the land, seized from Syria, after the Six-Day War. Although Syrian, the local musicians are considered part of the Palestinian scene because they’re subject to similar restrictions: they are not even allowed to travel to Syria, so they can pass through Israel and the West Bank only.”

Yet again Ralston failed to adequately clarify that if some of his featured musicians from Jerusalem and the Golan Heights do not have passports, that is because they have chosen to pass up the opportunity to apply for Israeli citizenship.

“All four members of TootArd, whom promoters regularly label as Palestinian, grew up in the village of Majdal Shams in the Golan area, and have permanent residency in Israel, but their official nationality is also ‘undefined’, and they have no passport.”

As we see what could have been an interesting article is seriously marred by the writer’s uncritical promotion of a politically motivated narrative which he advances by failing to provide the relevant background information and key context which would facilitate proper audience understanding of the topic.