BBC audiences heard the unchallenged narrative of an NGO which employed a terrorist.

Several weeks ago we documented the BBC’s coverage of the terror attack near Dolev on August 23rd which resulted in the murder of 17-year-old Rina Shnerb. 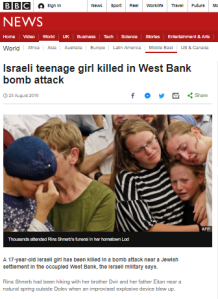 Since then the BBC has not produced any follow-up reporting, including about the related arrest of three members of the Popular Front for the Liberation of Palestine (PFLP) in September.

According to the Shin Bet, the suspects were members of the Popular Front for the Liberation of Palestine terror group from the Ramallah area. […]

According to the Shin Bet, the PFLP terror cell was led by Samer Mina Salim Arbid, 44, who has been involved in terrorist activities over the years. During the Second Intifada, he served directly under the head of the PFLP in Ramallah, creating IEDs and planning attacks.

“Arbid led the cell, prepared the IED and set it off the moment he saw the Shnerb family reach the spring,” the Shin Bet said.”

The terror cell leader, Samer Arbid, was employed (despite his past history of involvement in terror activity) as an accountant by the Palestinian NGO ‘Addameer’ which is known for its links to the PFLP – a designated terror organisation in the US, the EU, Canada and Israel. 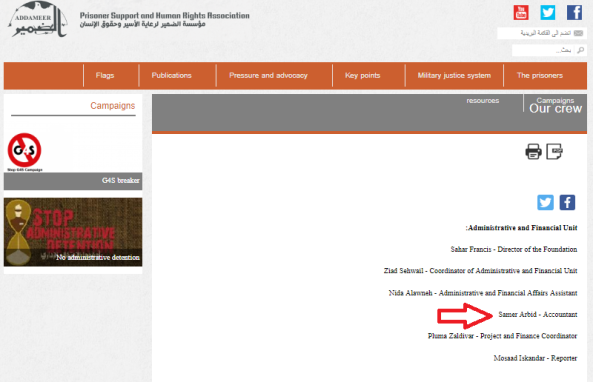 Five days after Rina Shnerb was murdered the BBC News website published a video report which included an interview with the director of ‘Addameer’, Sahar Francis.

That heavily promoted report was made available on the BBC News website for fourteen consecutive days.

In other words the producers of that report, along with additional BBC journalists, apparently saw nothing at all problematic in the amplification of the unchallenged narrative of a political NGO that is linked to a terrorist organisation that the BBC knows has murdered Israeli civilians in the past and which, we now learn, employed the leader of the PFLP terror cell apparently responsible for the brutal murder of a seventeen-year-old out hiking with her family.