BBC audiences would be unable to put Barbara Plett Usher's 'analysis' into its appropriate context.

An article titled “Trumplomacy: Are we seeing the end of a close Israel-US relationship?” appeared in the ‘features’ section of the BBC News website’s ‘Middle East’ page on October 9th. Its writer – Barbara Plett Usher – opened with a scornful account of part of a speech made by Israel’s prime minister. 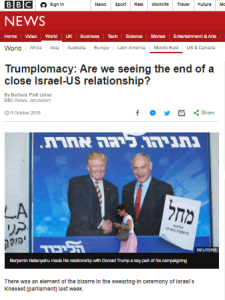 “There was an element of the bizarre in the swearing-in ceremony of Israel’s Knesset (parliament) last week.

Only five months had passed since the last time newly elected members took the oath and, given continued political paralysis after another round of inconclusive elections, they may have to do it all over again soon.

Added to that, Israeli Prime Minister Benjamin Netanyahu’s grim, almost apocalyptic speech could not have been less festive. He warned of an imminent war with Iran and unprecedented security challenges, saying it was unlike any remembered since the days of the 1973 Yom Kippur War.

Granted, his words were seen by many commentators as familiar campaign rhetoric aimed at making the case for why he should continue to lead the country, even though he failed to win a majority in the September vote.

“Ladies and gents, I give you The Great Iranian Threat,” wrote Ma’ariv columnist Ben Caspit in a sardonic take-down of Mr Netanyahu’s “time-honoured security threat”.”

“Secondly, [we] need to make budgetary decisions which we have not known for many tens of years. It is possible to go back very many years, maybe to the end of the Yom Kippur War, in order to understand what is demanded of us.”

“Deep concern seems to be spreading among Israel’s top security leadership that a rapid deterioration of the situation on the Iranian front is a distinct possibility. […]

All signs indicate that Iran decided to respond forcefully to the many aerial attacks against Iranian and other Shiite targets in Syria and Iraq, which tend to be attributed to Israel.”

Referring to what she described as “an apparent Iranian attack on Saudi oil installations”, Plett Usher later told readers that:

“The Israelis have been pushing back more aggressively and more openly against Iran’s proxies in the region, determined to halt the proliferation of Iranian missiles near their border. But the Saudi attack rang new alarm bells.

If Iran could directly hit Saudi Arabia with cruise missiles, went the thinking, it could do the same to Israel.”

However, providing audiences with factual information about the activities of Iran and its proxies near Israel’s border has long – to put it mildly – not been a BBC priority. BBC audiences have not, for example, been informed on the topic of the deployment of Iranian missiles in south-west Syria as explained in a backgrounder produced by the JCPA in August.

“Since July 2018, press reports have pointed at Iranian missiles deployed in the area near Suweyda, definitely not within the territorial demarcations announced by the Russians to Israel. According to the reports, Iran deployed missiles that were previously in the T4 airbase to the Ledja (a vast rocky lava area north of Suweyda) and to two additional airbases in the area…”

Neither have they seen any meaningful reporting on the activities of Iran’s partner Hizballah in that area.

Hizbullah has succeeded in establishing four permanent training bases, which also serve as ammunition depots, and short and medium-range missile bases, three of which are in Daraa and the fourth in the area of Quneitra. […]

Hizbullah commands five Shiite militias in the Golan area, each numbering several thousand fighters, and has been busy preparing a military option against Israel since the recovery of the southern provinces of Syria in case of a surge of hostilities between Israel, Iran, the Syrian regime, and Hizbullah. This deployment in the area facing Israel in the Golan provides Iran (and Hizbullah) the ability to open a second front. […]

Unprecedented until now, in June 2019, new positions manned by Hizbullah Lebanese fighters were deployed adjacent to the Israeli lines. These include positions in Tellet Aldrai’at and Tellet Al Mahir in the vicinity of the two small villages of Rafid and El ‘Isha, approximately 200 meters from the UNDOF checkpoint, controlling the central access from the Israeli Golan through Quneitra and from there to the main highway to Damascus.”

Obviously such information is crucial to anyone trying to put Plett Usher’s portrayal of the Israeli prime minister’s speech into its appropriate context but BBC audiences have instead for a long time had to make do with superficial reporting which all too often includes unnecessary qualification of Iran’s regional military entrenchment.