Members of the public may have been surprised by the BBC’s use of inverted commas in a Tweet promoting a report about the US House of Representatives’ passing of a resolution recognising the Armenian genocide.

The same punctuation was found in the original version of the report – headlined “US House votes to recognise Armenian ‘genocide’” – but was removed some eight hours later.

The background to that editorial policy can be found in a 2008 ruling by the now defunct BBC Editorial Standards Committee on pages 4 – 7 and 17 – 31 here, including the following on page 26:

“As to the language of how the Armenian massacre and starvation is reported the Committee noted the comments of the Head of Editorial Compliance, BBC News who stated:

“We put ‘genocide’ in inverted commas in our online reports, and in our television and radio reports we use the word in the context of reporting the dispute about premeditated intent. If we failed to do this, contrary to what you suggest, our coverage would indeed be unbalanced and misleading – unbalanced because the Republic of Turkey vigorously denies that its predecessor administration had any such policy and bitterly criticises some if not all of the source material you quote; misleading because we would be through our use of language addressing the issue as if it were decided when the news developments revolve around the disputed nature of the events.”

The Committee endorsed the comments expressed by BBC management, although it was concerned that the use of inverted commas was not always consistent in online content. It considered the use of quotes was not always necessary as long as the piece mentioning the event noted the level of dispute as to the use of the terminology.” 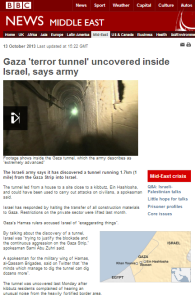 Those following BBC coverage of Israel have long been familiar with the corporation’s use of inverted commas (usually in connection with terrorism) as a way of ticking the ‘impartiality box’ – often with absurd results. For example:

BBC adds superfluous punctuation to US and Israeli statements on Hamas

BBC not sure cross-border tunnel intended for terror?

In which BBC News abandons all pretence of fact checking

Nevertheless, the BBC obviously believes that the employment of such punctuation is the most appropriate way to display ‘balance’ in its journalism.