The BBC continues to under-report rocket attacks against Israeli civilians.

On the evening of November 1st residents of Sderot and surrounding communities had to abandon their Shabbat dinner tables when terrorists in the Gaza Strip launched two barrages of missiles, with one home in Sderot taking a direct hit.

“According to the IDF, seven projectiles were fired during the first barrage. All were intercepted by the Iron Dome missile defense system. Following the first barrage, Palestinian media reported that an IDF tank shelled a Hamas observation post in the Strip.

Shortly afterward, three more projectiles were fired during a second barrage. Only one was intercepted.

The Sderot municipality spokesperson confirmed in a statement that a home sustained damage, but there were no injuries as all of its residents were in a bomb shelter.

“When I arrived at the street, there was chaos,” said Magen David Adom (MDA) paramedic Alex Kosinov. “Nearby there were numerous vehicles with shattered windscreens. The residents of the building, a 40-year-old couple with their children, were in a nearby building. They told us that they immediately entered the protected area and left a few minutes later. They were not injured and did not require medical treatment.”

MDA reported that it treated a 65-year-old woman in mild condition who fell while trying to reach a bomb shelter. The woman was evacuated to Barzilai Medical Center in Ashdod for medical treatment. Several others were treated for shock.”

Israeli forces responded to the attacks, which were attributed to the Palestinian Islamic Jihad.

News agency reports on the incidents were published by numerous media outlets but visitors to the BBC News website saw no coverage whatsoever of those Palestinian rocket attacks against Israeli civilians.

Since the beginning of the year twenty-nine separate incidents of terror attacks from the Gaza Strip using rockets and/or mortars have taken place. BBC audiences have seen coverage of just eight of those incidents. 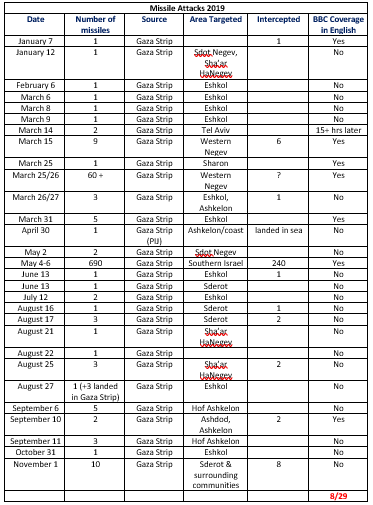