Conspiracy theories and propaganda are not "accurate and impartial news of the highest editorial standards".

Readers may recall that over the past sixteen months the BBC has repeatedly given amplification to Syrian and Russian government propaganda concerning the ‘White Helmets’ rescue teams in Syria.

On November 11th the BBC News website published an article about the death of the ‘White Helmets’ co-founder James Le Mesurier in Turkey and readers of that report were told that: 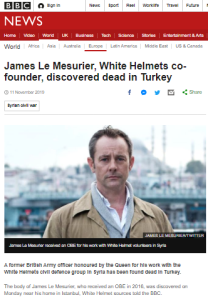 “…the Syrian government and its allies Russia and Iran have accused the White Helmets of openly aiding terrorist organisations and the Russian foreign ministry last week accused Mr Le Mesurier of being a former agent of the UK’s Secret Intelligence Service, better known as MI6.”

The BBC also thought it appropriate to embed a screenshot of the Tweet from the Russian foreign ministry in which that accusation was made before telling readers that a UK official had denied the allegation.

In April 2018 BBC Trending produced a report titled “Syria war: The online activists pushing conspiracy theories” which included a whole section on conspiracy theories relating to the ‘White Helmets’. The BBC is certainly aware that the Russian and Syrian propaganda was exposed and debunked two years ago and it also surely comprehends why such propaganda is spread by those regimes.

“Since 2015, the year the Russians began fighting in Syria, the White Helmets have been filming attacks on opposition-held areas with GoPro cameras affixed to their helmets. Syria and Russia have claimed they were attacking only terrorists, yet the White Helmets have captured footage of dead and injured women and children under the rubble. According to Human Rights Watch and Amnesty International, as well as eyewitness accounts, Putin’s bombers have targeted civilians, schools, hospitals, and medical facilities in opposition-held areas, a clear violation of international law. “This, above all, is what the Russians hated,” Ben Nimmo, a fellow at the Atlantic Council specializing in Russian disinformation, told me. “That the White Helmets are filming war crimes.””

Nevertheless, the BBC continues to amplify that baseless propaganda despite the fact that it contributes nothing to audience understanding of the topic and notwithstanding its legal obligation to “provide accurate and impartial news…of the highest editorial standards so that all audiences can engage fully with issues across the UK and the world”.