In that film BBC audiences saw an interview (apparently filmed during the funeral proceedings for Baha Abu al Ata) with senior Palestinian Islamic Jihad leader Khader Habib in which he made the following statements:

“We are on fire and angry and that should be translated into action. These actions have started this morning after the crime was committed. Rockets were fired towards Tel Aviv, and Islamic Jihad, with all the resistance groups, will continue targeting all the occupation’s safe places.”

The BBC promoted those statements to its worldwide audiences ‘as is’, making no effort to qualify the use of the term “crime” to describe the killing of a terrorist responsible for attacks on civilians or to clarify what Habib actually meant by ‘the occupation’ (seeing as Israel withdrew from the Gaza Strip over 14 years ago) or precisely what “the resistance” is  supposedly resisting.

Like the rest of the BBC’s coverage of this story (see ‘related articles’ below), this report too failed to provide audiences with any background information about the aims and ideology of the Palestinian Islamic Jihad, even while quoting its leaders.

On the same day a TV station called Alghad aired a speech by Khader Habib apparently made at the same event on the same day. 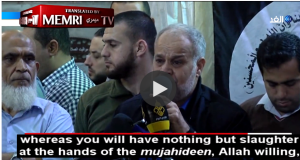 So who provided their audiences with the better view of the violent ideology of the Palestinian Islamic Jihad and hence more context to Israel’s actions? Was it one of the world’s biggest and most influential news organisations with its dedicated Arabic language department and one of the most frequented websites in Europe or was it a relatively new, Cairo based and Abu Dhabi funded Arabic language TV station?

‘Quite forthcoming with the confrontational approach’: guess what the BBC is describing

BBC doublethink on display in report on rocket attacks

0 replies on “What did BBC audiences learn from a PIJ leader interview?”