Domestic BBC audiences were told that one Israeli town 'cuts the West Bank in half'.

As documented here last week, one of the BBC News website’s three written reports relating to a statement made by the US Secretary of State promoted the false claim that the current US administration had changed a “four-decades-old position”.

“Palestinians have condemned a decision by the US to abandon its four-decades-old position that Jewish settlements in the occupied West Bank are inconsistent with international law.” [emphasis added]

“Secretary Pompeo’s statement marks a return to the policy of US administrations between 1981 and December 2016. In other words, the “position” described by the BBC is three years old rather than “four-decades-old”.”

Remarkably, both later on in that report as well as in an earlier one, the BBC made it evident that it knows that full well:

“In 1978, the Jimmy Carter administration concluded that the establishment of civilian settlements was inconsistent with international law. In 1981, President Ronald Reagan disagreed with that conclusion, saying he did not believe the settlements were inherently illegal.

Since then, the US adopted a position of describing the settlements as “illegitimate” – though not “illegal” – and sheltering Israel from condemnatory resolutions on the issue at the United Nations.

However one of the last acts of the Obama administration, at the end of 2016, was to break with US practice by not vetoing a UN resolution that urged an end to illegal Israeli settlements.”

Listeners to BBC Radio 4 reports on the same story received no such explanation and instead were repeatedly fed that “four decades” spin.

In the November 18th edition of BBC Radio 4’s ‘The World Tonight’ presenter Ritula Shah told her audience (from 17:11 here) that: [emphasis in bold added, emphasis in italics in the original]

Shah: “The US Secretary of State Mike Pompeo has announced that Washington no longer considers Israeli settlements built in the occupied West Bank to be illegal. The move breaks four decades of State Department policy.”

Returning to the topic later on in the programme, Shah brought in BBC News’ North America correspondent Aleem Maqbool (from 36:14) who promoted the same myth.

Maqbool: “…it’s certainly I suppose consistent with what we’ve seen from the Trump administration over the last couple of years in recognising, for example, Jerusalem as the capital of Israel and also recognising Israeli sovereignty of the Golan Heights – another area of course that was occupied during the Six Day War of 1967. But the timing has surprised some people because, you know, many Palestinians will feel – even over those four decades during which the United States did consider the building of settlements inconsistent with international law, it never really stopped those settlements expanding at a rapid rate to the point now where some of them are as big as cities.”

Maqbool then came up with another falsehood:

Maqbool: “One of them in particular – Ma’ale Adumim – cuts the West Bank in half.”

‘Cuts in half’ obviously means divides into two parts but Ma’ale Adumim does nothing of the sort. 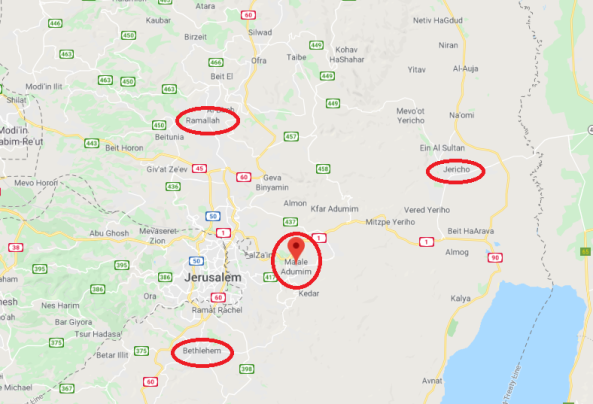 Of course similar inaccurate claims have been made by journalists in the past but Maqbool’s false statement clearly materially misleads BBC audiences.

Maqbool: “Secretary of State Mike Pompeo in that sentence overturned more than four decades of official US policy. It was under President Carter the State Department decided that, in keeping with much of the rest of the world, that Israel’s building of Jewish settlements on occupied Palestinian land was not allowed under international law.”

That ‘four decades’ spin which the BBC knows full well to be false and misleading continued in later BBC Radio 4 broadcasts, as will be seen in part two of this post.