As usual the BBC excludes essential context in order to promote a narrative. 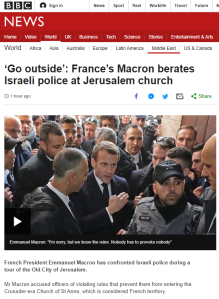 The BBC’s description of that “Jerusalem church” is as follows:

“The Church of St Anne, which dates back to 1138, is the best-preserved Crusader church in Jerusalem. According to Christian tradition, the crypt enshrines the home of the Virgin Mary and her parents.

It is located in occupied East Jerusalem, to the north of the hilltop site known to Muslims as al-Haram al-Sharif and to Jews as the Temple Mount.” [emphasis added]

The Church of St Anne is located in Jerusalem’s Old City. As we see, the BBC continues its long-standing practice of promoting the partisan political narrative according to which the Old City is categorised as “occupied East Jerusalem” without the provision of any of the essential context concerning Jordan’s belligerent attack on parts of the city and the subsequent nineteen-year occupation.

Interestingly, it took the BBC until the following day to add details to the story which were already known at the time of the report’s original publication.

“An Israeli police spokesman said that as President Macron’s delegation arrived at the Church of St Anne there was a “discussion” between Israeli and French security guards about who would be allowed to enter the site.

“The French president requested that the guidelines be respected and, based on the terms agreed upon ahead of time, an Israeli guard and a policeman escorted the president and his delegation inside,” he added.

“When the president and the delegation finished the visit, he apologised about the incident and shook hands with the security personnel.””

As we noted earlier this week, BBC audiences were not informed of the call published in an official Palestinian Authority newspaper to use violence to disrupt the event commemorating the Holocaust which was the background to the French president’s visit to Jerusalem. Had that context been provided, readers would of course have been better placed to understand this story.