While BBC audiences learned nothing about the context of Sudan’s shifting regional alliances, they did hear about the Palestinian wish-list concerning Jerusalem.

On February 3rd Israel’s prime minister visited Uganda where he met with that country’s president as well as the leader of Sudan.

“Israel and Sudan will work to upgrade their diplomatic relations, following Prime Minister Benjamin Netanyahu’s visit to Uganda on Monday.

The prime minister and Sudan’s leader, Chairman of the Sovereignty Council of Sudan Abdel Fattah al-Burhan, met on Monday for two hours in Entebbe, Uganda, at the invitation of Uganda’s President Yoweri Kaguta Museveni.

The leaders agreed to start cooperation leading to the normalization of relations between the two countries.

Netanyahu said he believes that Sudan is moving in a new and positive direction, and that he said this to US Secretary of State Mike Pompeo. Al-Burhan said he would like to help his country modernize by taking it out of isolation. […]

Potential relations between Sudan and Israel indicate the country is taking a more pro-Western tack, as does an invitation extended by Pompeo to al-Burhan to Washington.”

The US State Department issued a related statement.

Sudan’s regional alliances have undergone shifts in recent years as analysts have pointed out.

“Tehran gained access to Port Sudan on the Red Sea for its naval forces. Iranian ships would leave the Persian Gulf and enter the Red Sea, moving up to Sudanese ports. Frequently they carried shipments of Iranian weapons that were carried by trucks northward into Sudan and Egypt, destined for the Sinai Peninsula and the Gaza Strip. This was one of the key supply routes for Hamas as it built up its capacity to wage war against Israel. As a result of the Yemen war, Sudan decided that it would no longer maintain a pro-Iranian orientation; it now aligned its foreign policy with Saudi Arabia. As a result, Hamas lost its Sudanese line of supply.”

The Times of Israel notes that:

“Sudan is desperate to lift sanctions linked to its listing by the US as a state sponsor of terror — a key step toward ending its isolation and rebuilding its economy after the popular uprising that toppled longtime dictator Omar al-Bashir last year.”

Visitors to the BBC News website’s ‘Middle East’ page on the evening of February 3rd and the morning of February 4th did not find any coverage of that story among its main items. However if they scrolled down to read the ‘Latest Updates’ they came across an entry titled ‘Netanyahu in historic talks with Sudan’s leader’ taken from the website’s ‘Africa live’ page. 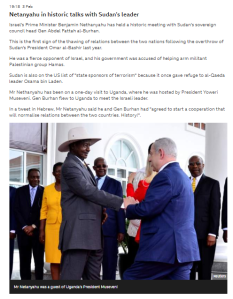 This is the first sign of the thawing of relations between the two nations following the overthrow of Sudan’s President Omar al-Bashir last year.

He was a fierce opponent of Israel, and his government was accused of helping arm militant Palestinian group Hamas.”

Interestingly, the BBC failed to note the all important Iranian connection to that supply of weapons via Sudan to the terrorist organisation Hamas. The item continues:

“Sudan is also on the US list of “state sponsors of terrorism” because it once gave refuge to al-Qaeda leader Osama bin Laden.

Mr Nethanyahu [sic] has been on a one-day visit to Uganda, where he was hosted by President Yoweri Museveni. Gen Burhan flew to Uganda to meet the Israeli leader.

In a tweet in Hebrew, Mr Netanyahu said he and Gen Burhan had “agreed to start a cooperation that will normalise relations between the two countries. History!”.

Meanwhile, Mr Museveni said he would “study” a request by Mr Netanyahu to open an embassy in Jerusalem.

Mr Museveni replied: “If a friend says I want your embassy here rather than there I don’t see why there would be …” before trailing off and adding: “We are really working, we’re studying that,” Reuters news agency reports.”

Readers then came across the 23.7% of this report which shoehorns the Palestinians into a story about the Israeli prime minister’s talks with the leaders of two African countries:

“Only the US and Guatemala have opened embassies in the disputed city of Jerusalem, despite strong condemnation from Palestinians.

The decision put the US and Guatemala at odds with the rest of the international community’s view on Jerusalem’s status.

The Palestinians claim East Jerusalem as the capital of a future state, and according to the 1993 Israel-Palestinian peace accords, its final status is meant to be discussed in the latter stages of peace talks.

But the latest peace plan from US President Donald Trump promised to keep Jerusalem as Israel’s undivided capital.

The Palestinian leadership has rejected this.”

“Mr Museveni has been under pressure from a lobby group, the Uganda Christian Coalition for Israel, to resume full diplomatic ties between the two nations, including the opening of embassies in Kampala and Jerusalem.

Uganda enjoyed full diplomatic relations with Israel until they were cut by Idi Amin’s regime in 1972.”

So as we see, while BBC audiences learned nothing at all about the Sudanese shifting regional alliances which are the context to this story, they did hear – yet again – about the Palestinian wish-list concerning Jerusalem.

So much for that “range and depth of analysis” promised to BBC licence fee payers.