Here’s the latest installment in our ongoing series of posts documenting #BDS fails.

Big news!!! Hugely important step towards #normalisation with the most important of the #GCC states. #Israel officially allows Israelis to travel to #Saudi Arabia https://t.co/rKBE7RoeuP

Under the agreement, the U.S.-Israeli consortium will supply Jordan gas for 15 years from the field in the Mediterranean.

The deal has faced opposition in Jordan where many view Israel as an erstwhile enemy. Activists and parliamentarians have lobbied the government for years with little success of scrapping the purchase.

The Jordanian government said after the agreement was signed that securing stable energy prices for the next decade can achieve annual savings of at least $500 million annually and help reduce a chronic budget deficit.

Energy-dependent Jordan imports about 95% of its energy needs with demand for electricity that rises by 6% to 7% annually.

U.S. ally Jordan, which has a peace treaty with Israel, has pushed through the deal despite the popular opposition by politicians and many deputies in parliament who say it makes the kingdom dependent on its neighbour for energy.

Boris Johnson’s huge Conservative victory in last month’s general election could lead to a deeper security relationship between the UK and Israel, according to a Middle East think-tank.

The Tories’ 80-seat majority, coupled with Labour’s worst performance since 1935, spelled good news for bilateral UK-Israel relations, according to a report published on Tuesday from the Britain Israel Communications and Research Centre (BICOM).

“The large Conservative victory in the December 2019 election, combined with Britain’s departure from the EU, could serve to deepen and enhance the Britain-Israel security partnership as Britain seeks to redefine its foreign policy and security strategy while strengthening relations with allies outside of Europe,” said BICOM.

In the Gaza Strip, the season for growing and marketing strawberries began last month — and it is already setting new precedents. After recent weeks saw the first-ever shipment of Gazan strawberries to the Gulf countries, today (Tuesday) five tons of strawberries left the Gaza Strip for England — through Ben Gurion Airport, as arranged by the COGAT’s Gaza CLA. 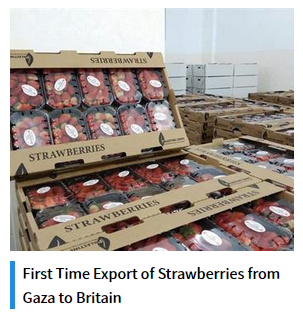 South Dakota is the 28th state to have enacted an anti-Israel boycott executive order or legislation.

Its measure requires vendors who want to contract with South Dakota agencies, authorities, commissions, departments or institutions not to work with companies that participate in boycotts of Israel. It applies to companies or contractors with more than five employees and on contracts of $100,000 or mor 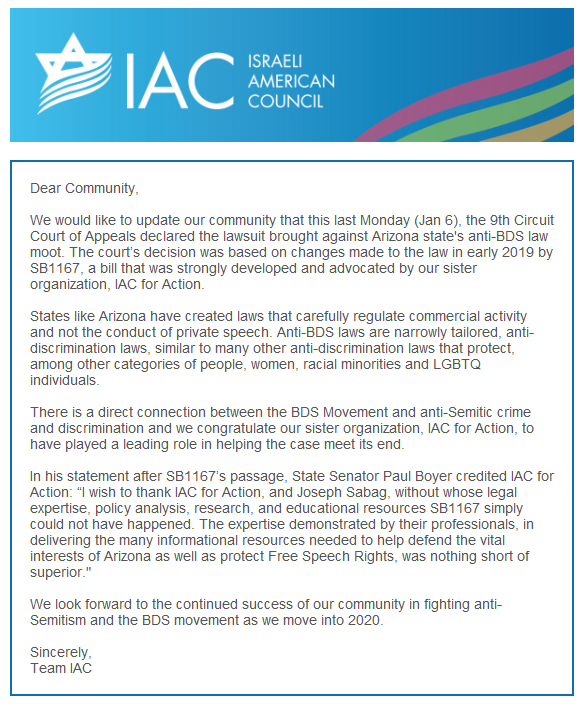 Intel Israel’s exports rose 70% in 2019 to $6.6 billion from $3.9 billion in 2018, the company has announced. Much of the increase in exports was due to the new Kiryat Gat fab increasing to full production. During its 46 years of operations in Israel, Intel has exported more than $60 billion worth of goods while investing $20.5 billion in building development centers and production lines.

In 2019, Intel continued to invest in Israel. In December, Intel acquired Israeli startup Habana Labs for $2 billion and earlier in the year the company inaugurated its new Petah Tikva development center, which has 1,800 employees and is one of the smartest buildings in the world. Intel spent $1.8 billion in procurement for the new building from Israeli company including 75% with small and medium-sized enterprises.

Israeli exports to the UK grew by almost 300 percent over the past decade, according to official figures published on Monday.

Israel’s Foreign Trade Administration (FTA) said the country’s overall exports increased by almost 70 percent, but exports to the UK grew by a whopping 286 percent since 2010.

Due to high demand, Air India is doubling the number of flights on its Tel Aviv – Delhi route to six weekly flights starting April 1, Indian Ambassador to Israel Sanjiv Singla has announced. There will be no Friday flights.

Air India launched three weekly Tel Aviv – Delhi flights in March 2018, making history by flying over Saudi airspace – the first-ever flights to Israel over Saudi Arabia, cutting two hours off travel time between Israel and India. Since then the carrier has increased the number of flights to five per week and from April there will be six weekly flights – double the number in two years.

Most recently, and ahead of the Israeli Space Week, Start-Up Nation Central hosted a group of 90 Israeli women from the space industry in order to support and help women succeed in this sector. WiSpace (Women in Space) Association aims to encourage professional women and increase their representation in SpaceTech.

Today, the global space market is estimated at a whopping $400 billion. With more than 50 SpaceTech companies, Israel is gradually becoming a significant player in this arena. From ground equipment and space systems to launchers and operators, here are some of the Israeli SpaceTech startups* shooting for the stars:

The search engine giant compiled the list by looking at Google Hotel searches between January and December 2019 for dates in 2020.

It compared that data to searches during the same time period in 2018, and ranked destinations according to their search volume increase from 2019 to 2020.

Israeli startups and high-tech companies raised a record-breaking $8.3 billion in 522 deals over the course of 2019, according to a new report by IVC Research Center and ZAG-S&W Zysman, Aharoni, Gayer & Co law firm published on Wednesday.

This marked a 30 percent increase compared to 2018 when Israeli companies raised $6.35 billion in 532 deals.

NEW YORK — New York City wants to keep young technology professionals from fleeing to California’s Silicon Valley, and the city has turned to an established Israeli venture capital firm to help it keep the tech talent on the east coast.

The city on Monday launched a unique partnership with Israeli venture capital and start up incubator firm Jerusalem Venture Partners with a flashy celebration at the new tech hub in downtown Manhattan, featuring deputy mayor Vicki Been and actress/entrepreneur Gwyneth Paltrow.

The $100 million partnership, including a $30 million contribution from New York City, will focus on companies working in the cyber technology sector.

“Israel has technologies that can support controlling this epidemic,” says Liat Goldhammer-Steinberg, CTO of Sonovia in Ramat Gan.

The system, whose devlopment is estimated to have cost hundreds of millions of dollars, costs approximately $1 million per plane, and has been installed in Israeli civilian and military aircraft, as per Defense Ministry guidelines.

The Airbus A330 used by Macron (F-RARF) was fitted with the Elbit Systems technology, which uses advanced laser technology to disrupt various wavelengths, causing missiles operating on infrared wavelengths to deviate from their assigned path and target.

Israel’s Trash Could Be Mercedes’ Treasure

Mercedes parent company Daimler AG is planning a pilot to test whether an ecological plastic alternative manufactured in Israel could be used in its vehicles, according to Israel-based cleantech startup UBQ-Zeelim Ltd.

UBQ, founded in 2014 and based in Tze’elim, a kibbutz in southern Israel, developed a process to recycle residual municipal solid waste such as food waste, soiled cardboard or paper, and mixed plastics usually destined for landfills into a plastic-like raw material. UBQ’s process is capable of taking material considered unrecyclable today, such as dirty diapers, and breaking it down to its basic natural components before reconstituting it into a new composite material, according to company statements.

AppsFlyer, an Israeli-American startup that develops tools for measuring the effectiveness of mobile ads, said it raised an enormous $210 million in a fundraising round that valued the company at $1.4 billion before the money.

Meanwhile, Snyk, an Israeli-British cybersecurity startup, said it had raised $150 million at a valuation it said was more than $1 billion, without providing an exact figure. The round was unusual both because it followed a $70 million fundraiser just four months ago and because 260 of its employees had celebrated the event at a party last Thursday without leaking news of it until the formal announcement Tuesday

Israeli weapons named among ‘Most Important of the Decade’ by Forbes

Three Israeli innovations in the field of warfare were highlighted in a recent addition of Forbes Magazine, which focused on the most important new weapons systems developed.

One innovation was Stuxnet, a malicious computer program believed to have been in development since 2005, which was used in a 2010 cyberattack targeting Iran’s nuclear program.

The magazine said the Iron Dome missile defense system, which was the only one of its type, was a milestone and effective countermeasure against short-range Palestinian rockets while also mentioning that the system has saved lives with its 95% success rate.

The third system mentioned by Forbes was the TROPHY active protection system (APS) for tanks, which is designed to inhibit incoming missiles, rockets and other anti-tank ordnance from striking their target.

“Israel lost 50 tanks to Hezbollah in 2006, but none in the 2014 Hamas war thanks to TROPHY, which fires explosives to destroy incoming rockets. The US has equipped Abrams tanks with it,” Forbes said.

LAS VEGAS, Jan. 8, 2020 /PRNewswire/ — Watergen’s GENNY, a new water-from-air appliance, has been named winner of the Energy Efficiency Product of the Year

Israel at the Super Bowl – h/t Elder of Zion

‘I Can’t Wait to Perform in Israel,’ Lionel Richie Tells Fans Ahead of Tel Aviv Concert

American singer Lionel Richie said in a video message last week that he was excited to perform in Israel on March 2 as part of his “Hello” world tour.

“Hello Israel, this is Lionel Richie, and I can’t wait to perform in Israel for the first time ever,” the “All Night Long” singer, 70, said. “We’re going to dance all night long. So go to vote and I’ll see you on the second of March in Tel Aviv. See you then.”

The performance at Tel Aviv’s Menora Mivtachim Arena, which was initially scheduled for September, will take place the same day as Israel’s Knesset elections and will start earlier than originally announced to avoid a conflict with the 10 p.m. publication of the exit polls. The concert was scheduled to begin at 8:30 p.m. but will instead commence at 7 p.m.

The anti-Israel group Code Pink tried pressuring Richie in August to cancel his concert in Israel but the singer instead blocked Code Pink’s Twitter account.

The Grammy-winning singer and songwriter has been a longtime supporter of Israel and in 2013 he entertained guests at a fundraiser in Los Angeles for the Friends of the Israel Defense Forces (FIDF), according to The Jerusalem Post.

French-Canadian diva Celine Dion will bring her powerful pipes and sparkly Las Vegas show to Israel for the first time next summer, with a seated show on August 4, 2020 in Tel Aviv’s Park Hayarkon.

The Tu B’Av show, marking the Israeli Valentine’s Day, has been a long time in planning, said promoter Shuki Weiss. Some 20,000 lucky lovebirds will get to hear “My Heart Will Go On” under the stars, with a special amphitheater constructed just for the show.

The former Eurovision winner will be coming to Israel as part of her “Courage” world tour that begins in March 2020, and which will take her to Europe, Lebanon and Cyprus prior to coming to Tel Aviv.

From classmates and coworkers to the Kardashians, many Instagram users wrapped up 2019 with a three-by-three grid collage of their most popular posts from the year, using an app based in Tel Aviv and developed by an Israeli.

“Top Nine” — available for download as a third-party application to the popular picture-posting social media platform — has gone viral and now holds the #1 spot in both the US and UK app stores. It is also available on Google Play.

Like Loading...
Tags from the story
Anti-Zionism, Antisemitism, BDS, bds-fails, Boycott Divestment and Sanctions, Delegitimization
Written By
Adam Levick
More from Adam Levick
A report at the Independent by Ben Lynfield focuses on Palestinian activists who...
Read More