The BBC's commitment to fact checking is once again on display.

On February 3rd the BBC News website published a piece by Tom Gerken of BBC News Washington on its ‘US & Canada’ page titled “The many meanings of the pinched fingers emoji”.

As the title suggests Gerken attempted to explain the different meanings of a hand gesture in various countries.

“Is it a way to show disbelief, a way to ask others to be quiet, or a cute gesture popularised by a K-Pop star?

It’s called “pinched fingers” and depending on where you are in the world, a new emoji announced by the Unicode Consortium, which approves standard emojis worldwide, could have a completely different meaning.”

Gerken obviously concluded that the best person to explain the meaning of that gesture in Israeli culture was an American journalist who lived in the country for just three years rather than an actual Israeli.

He also apparently did not bother to read the rest of that thread on Zetter’s Twitter feed. 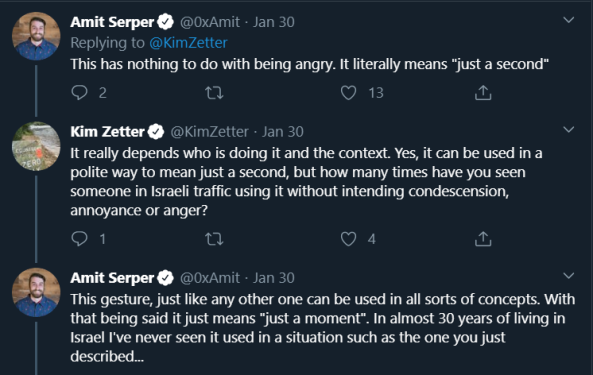 Gerken’s sloppy portrayal of Israeli culture to the BBC News website’s North American audiences, based on a claim which he obviously did not bother to verify made in one Tweet from a person who has “no patience with Israelis”, is sadly not unrepresentative of the BBC’s commitment to fact checking.