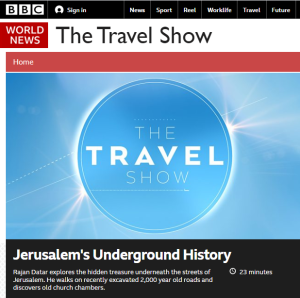 “This week, Rajan Datar explores the hidden treasure underneath the streets of Jerusalem. He walks on recently excavated 2,000 year old roads and discovers old church chambers from the time of the crusaders. “

At 38 seconds into the report viewers were told of a “controversial” archaeological excavation and Datar went to visit the City of David site, taking a tour of the Pilgrimage Road. Viewers heard that the site was “discovered by accident” in 2004 but were not informed that British archaeologists actually dug there in 1894 and that further excavations were conducted during the Mandate period and the Jordanian occupation.

Datar: “The Pilgrimage Road runs from the ancient Siloam Pool to Temple Mount – also known as Haram esh [sic] Sharif in Arabic – at the top.”

They were not informed of the road’s purpose – who was making a pilgrimage and to where – and Datar went on to visit additional parts of the City of David site.

At 04:54, the item took a political turn. [emphasis in italics in the original]

Datar: “Whilst the project team insist upmost safety for the local residents is the priority, that isn’t quite how everybody feels, especially among the Palestinian community who live here in Silwan, above the City of David site, which they call Wadi Hilweh. Local residents say cracks and sloping like this to dozens of houses have been caused by the excavation, complaining it’s like enduring an earthquake. None the less, the Israeli Supreme Court rejected those claims.”

In fact, only a small part of Silwan lies “above the City of David” site and related legal cases have been rejected by the Supreme Court on more than one occasion.

At 05:27, Datar brought in “Aziz, a travel writer and guide” to give “the alternative Palestinian perspective”. Despite BBC editorial guidelines concerning contributors’ affiliations, viewers were not told that Aziz Abu Sarah is also (as the BBC should know, having interviewed him in 2018) an activist associated with political NGOs.

After viewers had heard Abu Sarah complain that a project documenting biblical Jerusalem does not “tell you the story of the Palestinian residents” in Jerusalem or “the history of the Islamic groups that have lived in Jerusalem” – without clarifying that the Muslim conquest in Jerusalem took place in the 7th century – they saw Datar visit a Crusader site underneath a business in the Old City. While Abu Sarah claimed that “we didn’t know this exists a year and a half, two years ago”, similar Crusader era structures were discovered long before that timeframe.

At the end of the item Datar told viewers:

Datan: “So here’s the rub: in Jerusalem any excavation is going to be both amazing and controversial at the same time.”

Obviously Jerusalem has multiple layers of history which visitors can explore at a variety of sites and museums in addition to the City of David. What makes archaeology ‘controversial’ however is politicisation of the topic and Datan appears to have bought into that with the help of an inadequately presented political activist whose “affiliations, funding and particular viewpoints” were not disclosed to viewers.