On March 11th the BBC News website published a report on its ‘Middle East’ page about a statement issued that day via the United Nations Office of the High Commissioner for Human Rights. 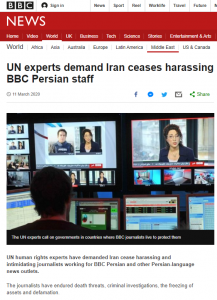 The journalists have endured death threats, criminal investigations, the freezing of assets and defamation.

Some relatives have been held in degrading conditions and ordered to tell family members to leave the BBC.

The harassment reportedly intensified when the journalists covered the mass anti-government protests in November.”

While that story was obviously newsworthy, so was a related one concerning a communication put out by the same UN office the following day. As reported by the Times of Israel:

The 47-nation council adopted the report after a debate which featured lengthy praise for the Islamic Republic, according to UN Watch, a Geneva-based nonprofit organization. […]

“In the UNHRC report and at the debate, countries including North Korea, Syria, Russia and China applauded Iran’s rights record.

Tehran refused to allow the UN’s Special Rapporteur on Iran, Javaid Rehman, to tour the country to investigate its human rights conditions.

Iran’s ambassador to the council, Esmaeil Baghaei Hamaneh, said Iran was “scapegoated for human rights violations,” and that the US was “viciously” targeting the Iranian health care system amid its severe coronavirus outbreak.

Deputy chief of Iran’s High Council on Human Rights, Majid Tafreshi, said that all citizens in Iran are “equally protected by the law,” and said that journalists and NGOs have freedom of expression.”

UN Watch reported that among those praising Iran at that session was the Palestinian representative who stated that “We commend Iran’s commitment to promote and protect human rights.”

“Cynical politics have hijacked this council, giving a free pass to a regime that subjugates women, tortures human rights dissidents, executes gays and spreads hatred, war and terror across the region, including aiding and abetting mass atrocities in Syria.”

No reporting on that story is to be found on the BBC News website’s ‘Middle East’ page or under its ‘United Nations’ or ‘Iran’ tags.

As we all too frequently have cause to document on these pages, the BBC regularly but uncritically quotes and promotes Israel related reports and resolutions produced by the UN Human Rights Council – most recently concerning its blacklist of companies operating in Judea & Samaria.

However when the bias and redundancy of that UN body is on display, the BBC is nowhere to be found.