On March 6th one of the editions of the BBC World Service radio programme ‘Newsday’ included an item (from 04:36 here) relating to the previous day’s discovery of cases of Coronavirus in Bethlehem. 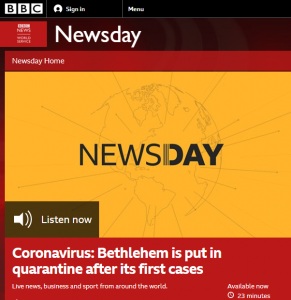 Padhy: “…in the biblical city of Bethlehem a Palestinian official said they had closed the Church of the Nativity after suspicions that a number of Palestinians had caught the virus so I’ve been spending some time talking to Mustafa Barghouti who is a Palestinian MP and a doctor himself.”

Padhy refrained from informing listeners that the Palestinian Legislative Council – the parliament – has not convened since 2007 due to the Hamas-Fatah split and that Barghouti was last elected over 14 years ago.

Barghouti began by giving a reasonable account of the situation which included the following:

Barghouti: “There is a status of quarantine now imposed in Bethlehem area and in the whole of the West Bank to ensure that no more cases will be infected due to the fact that some of these people who have the disease have been in contact with other people. […] This is a very important precaution that is taken place by the Palestinian Authority.”

However as is usually the case when Mustafa Barghouti is interviewed by the BBC, he soon took advantage of the platform given to him for the promotion of politicised messaging.

Barghouti: “Of course you must understand that in the West Bank and Gaza we have [to be] very careful because we have a poor infrastructure due to the fact that we have been under Israeli military occupation for more than 52 years.”

The Gaza Strip has of course not been under “Israeli military occupation” for over 14 years and the Palestinian Authority has been in control of Areas A and B – including healthcare – for nearly a quarter of a century. Nevertheless, listeners heard no challenge to Barghouti’s false claims.

Barghouti: “In addition to that we are unable to control our borders or the movement because of Israeli restrictions as well so it’s complicated…”

Both the Palestinian Authority and Hamas have the ability to close crossings. The day before this interview the PA ministry of tourism announced a ban on foreign tourists and the PA prime minister announced limits on traffic between different areas.

Barghouti: “It’s also important to understand that [what] we have here is a very complicated situation because we have a Palestinian Authority with very limited authority since we are under the military Israeli occupation and the decision to close down Bethlehem area completely was taken by an Israeli minister which means the Israelis can close down any Palestinian city any time they want without even consulting with us. So of course we have to take the burden of two things: the burden of this horrible disease and the necessity to encounter it every possible way and also the burden of the fact that we are not in control of our own freedom of movement, of our own borders.”

The Israeli minister to whom Barghouti referred is the Minister of Defence. As reported at the time by the Jerusalem Post, the decision to close the crossing between Israel and Bethlehem was taken together with the PA.

“Defense Minister Naftali Bennett announced on Thursday, in coordination with the IDF and Palestinian Authority (PA), a closure of Bethlehem due to concerns on the spreading of coronavirus. Both Israelis and Palestinians will be restricted from entering and leaving the city.”

The Times of Israel noted that:

“Israeli and Palestinian health officials held a meeting on Thursday to coordinate their responses, and shared information on the virus’s spread according to Israeli daily Haaretz.

COGAT, the Israeli defense body responsible for Palestinian civilian matters, said it had delivered 250 test kits to the Palestinians and was coordinating joint training sessions for Israeli and Palestinian medical workers.

COGAT said the closure of Bethlehem would apply to all Israelis and Palestinians, but not goods, which would continue to flow freely and would remain in place until further notice.”

Newsday’s worldwide audience of course heard nothing of such cooperation between Israel and the Palestinian Authority. Instead they got an entirely predictable but totally unchallenged dose of politicised messaging from a regular BBC interviewee who never passes up such an opportunity.

The limits of BBC News reporting from PA controlled territories