As we saw last week, the BBC Jerusalem bureau already briefed audiences on the topic of Coronavirus in the Gaza Strip over a week before the first two cases were diagnosed. Listeners to at least four programmes on different platforms heard the following long-employed talking points concerning the Gaza Strip repromoted in Tom Bateman’s preemptive reports:

However when it came to explaining to audiences why health services, power supplies and water supplies in the Gaza Strip are as they are, the BBC was distinctly less forthcoming.

“…problems […] are compounded by the tangled politics here. Israel and Egypt’s crippling blockade – meant to stop weapons getting to Hamas militants – the recent bouts of fighting with Israel and the deep split between the two main Palestinian factions all add to the crisis.”

Of course the sole reason for that partially portrayed “blockade” is the terrorism perpetrated by Hamas and additional terrorist organisations since Israel disengaged from the Gaza Strip nearly a decade and a half ago. The BBC, however, provided no serious background information on that topic – including the issue of Hamas’ budgetary priorities which place terrorism over healthcare and other services – while employing its standard euphemism “militants” to describe Hamas.

Neither were audiences given any significant information on how “the deep split” between Hamas and Fatah has affected the standard of living and services such as water, power and healthcare in the Gaza Strip.

The main story on the BBC News website’s ‘Middle East’ page on March 24th was headlined “Gaza: Virus fears in crowded strip” and the sub-heading read: 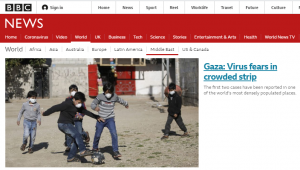 The link led to a report by Yolande Knell which appeared on the website’s ‘Coronavirus’ live page.

Readers found many of the talking points regularly promoted in BBC content.

“Since the start of the pandemic, health officials have worried about it reaching this impoverished coastal enclave – one of the world’s most densely populated places.”

“Social distancing is almost impossible among large families living in Gaza’s crowded refugee camps and built-up neighbourhoods, raising fears that infection could spread fast and that overstretched hospitals could be overwhelmed.”

According to a WHO report published in May 2019:

According to the OECD, Colombia has the same ratio of beds per 1,000 population and Mexico, Costa Rica, Indonesia and India have lower ratios.

“Gaza has been kept under blockade by Israel and Egypt since the militant group, Hamas, took full control of the territory in 2007. Up to now, some Gazans had been commenting on the irony of how their enforced isolation appeared to be protecting them during this health crisis.”

Apparently Knell did not recognise the irony of promoting the notion of “enforced isolation” while having earlier in her report noted that the first Covid 19 patients in the Gaza Strip were “two men returning from Pakistan”. She also refrained from disclosing that according to reports “more than 2,700 people are in home isolation [in the Gaza Strip], mostly having returned from Egypt”.

As we see, the BBC’s messaging in reports about the Gaza Strip and the Coronavirus epidemic is no different from the narratives it has been promoting for years, including the inaccurate notion that the standard of healthcare stems from Israel’s counter-terrorism measures.

On the day that Knell’s report was published the Israeli journalist Hezi Simantov (a veteran Arab affairs reporter) noted that Hamas’ Khalil Al-Hayya had declared that “we will place the full responsibility on Israel in the event that the Corona virus spreads in Gaza because our ability to deal with the pandemic is lessened because of the blockade”.

The fact that the deputy head of Hamas’ political bureau in Gaza and the BBC are promoting the same talking points while both avoiding the topic of Hamas’ responsibility for the state of health services in the territory is obviously noteworthy.

0 replies on “Mapping BBC messaging on Gaza and Corona”