On March 23rd the BBC News Press Team put out this Tweet: 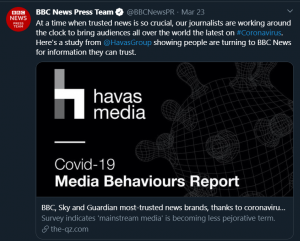 The article by freelance journalist Ben Bold which the BBC chose to promote states:

“The BBC has become the most-trusted news brand on coronavirus, with 64% of respondents selecting it as a reliable source of information from a list of media brands. The public-service broadcaster beat Sky News, which was voted for by 29% of participants, followed by The Guardian (15%), according to research from Havas Media Group.

The Covid-19 Media Behaviours Report, which surveyed nearly 1,500 respondents, found that more than half (53%) of Brits are using BBC News more than before Covid-19 hit the UK – more than double the proportion of people for any other channel.

Eva Grimmett, Havas Media’s chief strategy officer, said: “This study really highlights the role that trusted, meaningful media play in times of crisis. While most channels have seen an increase in consumption in response to Covid-19, our research reveals a much greater reliance on live TV and a need for trusted news brands such as the BBC. We’re looking forward to seeing how this behaviour develops as the situation evolves in the coming weeks.”” [emphasis added]

The Havas Media Group is part of the Havas Group – a multinational advertising and PR company.

Havas has long worked with the BBC and opened an office in Manchester after having been contracted to handle the corporation’s strategic media planning in 2015. That contract is apparently currently worth some £25 million according to reports from last August stating that Havas would be tendering to retain the account. Havas Media Manchester still lists the BBC among its clients.

In addition, Havas Media is listed as being contracted to provide media services to the BBC in relation to TV Licensing.

To summarise: while a UK government consultation concerning the TV license is still ongoing, a PR company contracted to provide media services to the BBC in relation to television licensing just happened to conduct research at the time of a pandemic which “reveals…a need for trusted brands such as the BBC” and a BBC press team then promoted those findings without clarification of the commercial relationship between the BBC and that PR company.

How the BBC outsources its complaints system