With BBC Jerusalem bureau coverage of the Coronavirus story having focused mainly on Bethlehem and the Gaza Strip, audiences have heard much less about the measures being taken by Israeli authorities to combat the pandemic, including at religious sites in Jerusalem. 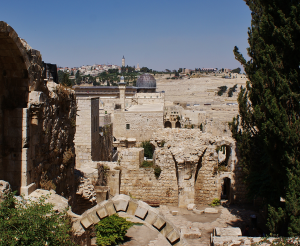 On March 15th the director of al Aqsa Mosque announced that it would be closed in light of the Covid 19 outbreak but that prayers would continue to be held outside.

Five days later clashes erupted in Jerusalem as police sought to limit the number of people arriving for Friday prayers in accordance with Ministry of Health directives and the chairman of the Waqf was subsequently fined for allowing worshippers to gather in breach of those guidelines.

On March 22nd the Waqf decided to close the compound to all but Waqf employees.

“The administration of the Wakf Islamic religious trust announced on Sunday that it has decided to suspend prayers at the Al-Aqsa Mosque compound in Jerusalem as of Monday morning to prevent the spread of the coronavirus.

The unprecedented decision came in accordance with recommendations by religious and health parties, the Jordanian-controlled Wakf said after holding an emergency meeting in Jerusalem.

The decision means that worshipers would not be permitted to enter the compound starting Monday. […]

In the past few weeks, hundreds of Muslims have been converging on the compound for prayers, ignoring warnings by the Israeli Health Ministry and other health institutions in Jerusalem.”

The Palestinian Authority had already closed mosques and other religious institutions in areas under its control on March 14th. Nevertheless, the PA’s official daily newspaper published an article on March 22nd criticising Israel for that decision taken by the Waqf.

“The lead article adorning Al-Hayat Al-Jadida’s front page detailed the Islamic Wakf Council’s criticism of Israel for fining the council’s chairman Abdul Azim Salhab NIS 5,000 for not closing the al-Aqsa Mosque on the Temple Mount on Friday. According to the article, Salhab claimed that Israel was simply taking advantage of the coronavirus outbreak, exploiting it as a means to harm Muslims by closing the mosque.”

The same edition of the paper also criticised Hamas for not closing mosques in the Gaza Strip.

Readers may recall that Salhab – who has a long record of promotion of incitement using baseless rumours about ‘threats’ to al Aqsa Mosque – was interviewed by the BBC in 2017.