As we have noted on several occasions of late, BBC audiences have not seen any reporting on the topic of the cooperation between Israel and the Palestinian Authority in combating the outbreak of Coronavirus in the region. The UN Special Coordinator for the Middle East Peace Process recently commented on that topic:

“In a statement released on Friday, the coordination and cooperation established between Israel and Palestine, with regard to tackling COVID-19, was described as “excellent”.

The Israeli and Palestinian authorities are continuing to coordinate their responses closely and constructively, the statement said, which is a major factor in the level of disease containment achieved so far. […]

Since the beginning of the crisis, Israel has allowed the entry of critical supplies and equipment into Gaza: examples of critical supplies include swabs for collection of samples and other laboratory supplies required for COVID-19 testing, and Personal Protective Equipment to protect health workers.

The statement also noted Israel’s cooperation in allowing health workers and other personnel involved in the COVID-19 response to move in and out of the West Bank and Gaza.”

Neither have BBC audiences seen any mention of an incident which took place on the evening of March 27th.

“Terrorists in the Gaza Strip fired a rocket toward Israeli territory, triggering warning sirens in the southern town of Sderot and the surrounding area on Friday evening, the Israel Defense Forces said in a statement.

A regional spokesman said the projectile apparently fell in an open area and there were no injuries or damage.

By contrast, consumers of BBC content on both domestic and international platforms have repeatedly – but erroneously – been informed since mid-March that the reason that the Gaza Strip is badly placed to cope with the Covid 19 outbreak is “crippling” Israeli measures taken against terror organisations which the corporation cannot even bring itself to name as such.

Although the BBC consistently fails to provide its audiences with a representative portrayal of rocket attacks perpetrated against Israeli civilians by terror factions in the Gaza Strip, one would have thought that a story about civilians in lock-down and quarantine having to dash to air-raid shelters during a pandemic – and the subsequent issue of guidelines on how to respond to such a situation – would have sparked at least a bit of interest on the part of BBC journalists in Jerusalem. 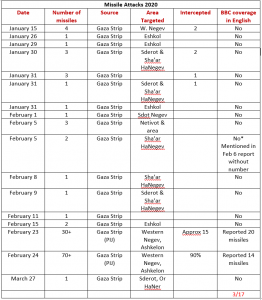