On March 17th listeners to BBC Radio 4’s ‘Today’ programme heard the following report in a news bulletin (from 2:08:05 here):

Newsreader: “Israel’s government has approved measures for its security agencies to use mobile phone data to track the location of suspected Coronavirus patients. The move has led to criticism from civil rights groups. From Jerusalem, here’s our Middle East correspondent Tom Bateman.”

Bateman: “The emergency measures allow the Shin Bet, Israel’s domestic security agency, to harvest information, including location data, from the mobile phones of confirmed Coronavirus patients and those suspected of having the disease. The regulations were passed during an overnight sitting of the cabinet, bypassing parliamentary approval. The mobile phone data showing an individual’s movements will be passed to the Ministry of Health to alert others who they may have come into contact with and will also be used to enforce quarantine regulations. Israel has more than 300 confirmed cases of the virus. Civil rights groups called the move dangerous. The government said it was trying to strike a balance between health needs and people’s rights.” 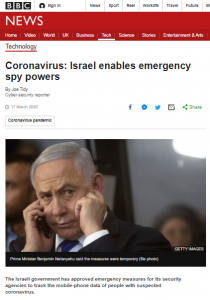 “The Israeli government has approved emergency measures for its security agencies to track the mobile-phone data of people with suspected coronavirus.

The new powers will be used to enforce quarantine and warn those who may have come into contact with infected people.

The temporary laws were passed during an overnight sitting of the cabinet, bypassing parliamentary approval.

The Association for Civil Rights in Israel called the move “a dangerous precedent and a slippery slope”.

Such powers are usually reserved for counter-terrorism operations.”

On March 29th listeners to the afternoon edition of the BBC World Service radio programme ‘Newshour’ heard a report (from 37:10 here) by Krassi Twigg of BBC Monitoring about “fears that some countries are seeing new levels of intrusion which could have a damaging effect on societies”.

The report mentioned South Korea, Italy, France and (from 40:57) Israel.

Twigg: “…and Israel has ordered its domestic security agency to track the mobile phone data of suspected Coronavirus cases. The Shin Bet normally uses such surveillance methods on Palestinians suspected of planning attacks on Israelis. Joel Greenberg, BBC Monitoring’s Israel specialist, said the use of these methods against [sic] Israeli citizens has been hugely controversial.”

Greenberg: “Critics of the policy have challenged it in the Supreme Court and they argue that it’s a dangerous invasion of privacy by the government. The government has said that the use of mobile phone tracking will be strictly limited to the battle against the Coronavirus but still the critics say that there may be no going back. Once the Shin Bet has begun tracking the cell phones of ordinary Israelis, the policy may be used again.”

The story is however by no means as simple as those three BBC reports spread over a period of twelve days tell audiences. Only in the written report was it made it clear that “Israel’s Prime Minister Benjamin Netanyahu says the new powers will last for 30 days only”.

The chain of events actually began two days before the BBC picked up the story, on March 15th, as reported by the Times of Israel.

“The government on Sunday approved a proposal to allow the Shin Bet security service to perform mass surveillance on Israelis’ phones without requiring a court order in an effort to curb the spread of the COVID-19 coronavirus, prompting major concerns of privacy and civil liberty violations.

The measure will require final approval from the Knesset’s subcommittee on clandestine services before it can be put into action.

The Prime Minister’s Office said the Shin Bet will be limited in what data it collects and who within the government will have access to it. In addition, under the proposal, the agency will only be able to use the information in the fight against the coronavirus, and the power is scheduled to end 30 days after it is granted by the Knesset subcommittee. […]

In recent weeks authorities in Taiwan and Singapore, among other countries, have used cellular phone data to ensure that citizens were abiding by required quarantine orders.

Those tools — the Israel Police and Health Ministry already have similar means at their disposal — are not what was approved by the government Sunday.

Instead, the Shin Bet was permitted to use phone data — notably which cell towers the device is connected to — in order to retroactively track the movements of those found to be carriers of the coronavirus in order to see with whom they interacted in the days and weeks before they were tested in order to place those people in quarantine.

The Shin Bet will relay the information to the Health Ministry, which will send a message to those who were within two meters (6.6 feet) of the infected person for 10 minutes or more, telling them to go into quarantine.

“The information will be given only to the Health Ministry, to specific people with security clearances, and it will be erased immediately after it is used,” a senior Justice Ministry official told Channel 13 news.”

However the Knesset subcommittee did not vote on the matter and on March 19th the Supreme Court ruled that the tracking could not continue for more than five days without Knesset oversight.

“In a dramatic decision, the High Court of Justice said Thursday that it would shutter the government’s new mass surveillance program if Israel’s parliament fails to establish parliamentary oversight over it within five days.”

Following a request from the State Prosecutor and the re-establishment of the subcommittee, the Supreme Court lifted the injunction on March 24th on condition that legislation concerning the surveillance measures would be put in place.

“The High Court warned that if the legislation was not advanced in the coming weeks, it would once again be forced to intervene.

The judges noted that, given the additional government restrictions expected to be approved to further curb movement, the surveillance should be used as little as possible to minimize privacy violations.”

Especially given that, as the BBC has reported, the UK is also considering the employment of technological measures to combat the pandemic, one would have expected BBC journalists – including BBC Monitoring’s “Israel specialist” – to be able to report the story more accurately and with at least some mention of the safeguards put in place rather than focusing primarily on the speculative claims promoted by inadequately presented political NGOs such as ACRI and Adalah.