As regular readers know, since mid-March the BBC has produced several reports (see ‘related articles’ below) on the topic of the Gaza strip and the Coronavirus pandemic; some pre-emptive and some after the first cases were diagnosed. Most of those reports focused on the population density and poor healthcare services in the Gaza Strip, with some falsely claiming that Israeli counter-terrorism measures are responsible for the latter.

BBC audiences have however been told next to nothing about Hamas’ prioritisation of terror over public services for more than a decade, the Palestinian Authority’s responsibility for the shortage of medicines and equipment in hospitals in the Gaza Strip or the part played by Israel in delivering Coronavirus testing kits and medical supplies to the territory.

In early March the Hamas terror organisation which controls the Gaza Strip told residents not to travel abroad and later closed the crossings into Israel and Egypt. Hamas also began building quarantine facilities and as of April 1st there were twelve Covid 19 cases in the Gaza Strip. Between March 22nd and March 28th, 68,275 tons of goods were delivered to the Gaza Strip including 12,423 tons of food and 145 tons of medical supplies. 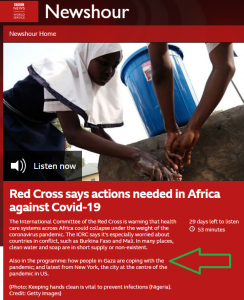 The March 31st evening edition of the BBC World Service radio programme ‘Newshour’ – presented by Paul Henley – included yet another Gaza-Corona item (from 09:01 here): an interview with Najla Shawa who who works for the NGO Oxfam and was previously an UNRWA employee. Since 2015 she has been repeatedly interviewed by the BBC, more often than not without proper identification and with no information given to BBC audiences concerning her “particular viewpoints”.

Henley: “Let’s take a look now at the view from Gaza because the United Nations warns that poverty and a debilitated health system in the Palestinian territories would make an outbreak of Coronavirus particularly disastrous. There are only a handful of confirmed cases in Gaza so far. I’ve been talking to Najla Shawa who’s food security manager of Oxfam in Gaza.”

Shawa: “Unfortunately we are very concerned. As you know this pandemic is spreading widely around the world and in a place like Gaza, that’s a huge concern. And yes, very much so it might be a beginning and it’s very worrying for a place like Gaza.”

Henley: “You’ve Tweeted that for a start, stockpiling is not an option for people who live in Gaza, haven’t you?”

Shawa: “Actually Gaza is already in a very dire situation in terms of the very basic living. I think everybody would be following the [unintelligible]. Gaza has 37% unemployment, 62% of Gazans don’t know their next meal where is it going to come from. And you’re speaking about population that is also…it’s a very highly populated area in a very vulnerable situation to be honest. So even before the Covid 19, things were already very fragile and very, very challenging for most of the people in Gaza.”

Henley: “So the people’s resilience there has already been tested pretty much to the full.”

Shawa: “Exactly and I think now more and more I think the population have basically depleted all their resources. There’s a sense of solidarity that brings people together to support each other. However the resources are just diminishing. People already don’t have jobs, already don’t have incomes. We already locked down and there is no movement, there’s no real economy. There are no basic services and looking at the health services for example, it’s a very weak system already.”

Henley made no effort to inform listeners of the crucial context of the rift between Hamas and the Fatah-controlled Palestinian Authority in relation to that “weak system” of healthcare.

Henley: “What are people saying about the threat of the pandemic?”

Shawa: “People are very much aware of what’s going on in the world and they are very concerned. And currently like everyone is just waiting by the hour to hear the news about any new cases. So those who have some capacity to stock up some food or some essential items are doing so. However most of the population don’t have this capacity unfortunately. You know the majority of Gaza people depend on aid for life-saving assistance that is provided by humanitarian organisations.”

In light of those claims Henley could of course have raised the question of the efficacy of NGOs working in the Gaza Strip for the last decade and a half since Israel disengaged from the territory (Oxfam, for example, claims to have spent 75 million Euros in the Palestinian territories since 2014) but instead brought up another standard BBC talking point.

Henley: “And it’s well known already that people live in very close proximity to each other in Gaza.”

Shawa: “Absolutely. 5,000 persons per square kilometre. I mean you’re talking about 2 million people in this place and the number of ICU beds are hardly 87 if we count the private and the public hospitals. So this is a very worrying situation to be honest. And the extreme weakness of the system; there’s real need to very basic support to the population already from before. There are like more than 1,700 who require treatment outside of Gaza and they’re not able to access that since the lock-down. And for the lock-down I mean Gaza has been always locked down. We totally know what this means. We can empathise of course with everyone in the world and this is a moment where everyone is kind of thinking about the other in this sudden crisis. But we Palestinians have known that for many, many years unfortunately.”

The Gaza Strip has not been “always locked down”: restrictions on movement into Israel were brought into place due to the Palestinian terrorism which went completely unmentioned throughout this item. Neither were listeners informed that it was Hamas which instigated the current closure of crossings.

Henley: “What about schooling for children? What’s the situation there?”

Shawa: “Schools have been closed since more than 3 weeks and universities as well. That’s definitely a problem because you have all the kids on lock-down in their homes and there is no place to go, no space, there’s no…also as I said the poverty is so dramatic that even their basic rights are not being met. More than 400 thousand children are living under poverty. And this is quite alarming too and very worrying for us as Oxfam and as all humanitarian organisations.” 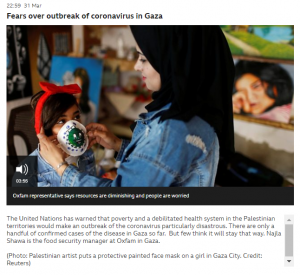 As we see Henley failed to even remotely challenge any of Shawa’s talking points throughout that entire four-minute interview (an edited version of which was also posted in the ‘updates’ section of the BBC News website’s ‘Middle East’ page) and refrained from providing the background information and context which would further audience understanding of the situation in the Gaza Strip. Of course Shawa’s talking points concerning population density, poverty and the healthcare system are exactly the same as the BBC’s own long-promoted narratives and so Henley’s soft-ball interviewing comes as no surprise.