On March 31st an article by the BBC’s diplomatic correspondent Jonathan Marcus titled “Coronavirus: A ticking time-bomb for the Middle East” was published on the BBC News website’s ‘Middle East’ page. 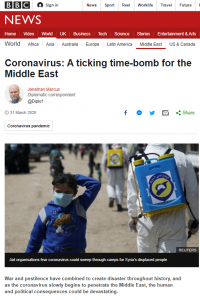 The article is made up of comment on a number of locations in the region, including Israel, the Palestinian Authority administered territories and the Gaza Strip. [all emphasis added]

“The virus has already arrived in the region. Israel – a country with a sophisticated Western-style health system and a significant capacity to mobilise resources – is already beginning to struggle with the potential consequences of the pandemic.

It is facing the self-same problems as experienced in Western Europe and the United States.”

Marcus did not provide any information to illustrate or substantiate his claim that Israel “is already beginning to struggle”.

“However, the Middle East has some specific problems that may exacerbate the crisis. Ways of life governed by religion, for example, play a significant part in the lives of many countries’ citizens.

Such communities may often be insular and slow to change their practices.

It is perhaps no accident that in Israel, its ultra-Orthodox Haredi community has been slow to adopt the recommended social distancing measures and has suffered disproportionately from the virus.”

While rates of infection have indeed been higher than average in some ultra-Orthodox communities, Marcus’ attribution of that solely to “ways of life governed by religion” ignores additional relevant factors such as poverty, population density and the difficulties of effective isolation for members of large families.

Interestingly, the BBC has repeatedly cited those three factors in its many reports on Coronavirus in the Gaza Strip and later on in his article Marcus himself referred to that territory’s population density.

Towards the end of the article readers were told that:

“Even in democratic Israel, the pandemic has sparked a constitutional crisis with political repercussions. The need to tackle the coronavirus looks like forcing opposition leader Benny Gantz into a national unity government under Benjamin Netanyahu (something he said he would never do and a move which has split his new party asunder).

And the closure of the courts has delayed the corruption trial of Prime Minister Netanyahu, who looks like soldiering on in office.”

Israel of course has no written constitution and so the claim of a “constitutional crisis” is debatable. The political deadlock in Israel which has not been resolved by three general elections has been ongoing for a year and was not “sparked” by the pandemic.

As we have previously had cause to note, the courts in Israel have not been closed. Activity has been reduced in line with Ministry of Health instructions and the Judiciary’s website states:

“The courts and employment tribunals will function under emergency measures whereby only urgent hearings will be held.”

Marcus gave a politicised portrayal of the Gaza Strip – from which Israel disengaged in 2005 – and the areas which have been under Palestinian Authority control for two and a half decades as “Israeli-occupied”, despite going on to later contradict himself by describing the PA as a governing body and Hamas as “rulers”.

“Even in places where there is the absence of full-scale war, there are some alarming potential coronavirus crisis-points. The Israeli-occupied West Bank and the Gaza Strip are a case in point.

The Palestinian Authority, which governs in about 40% of the West Bank, is struggling with limited means to curtail the initial outbreak, with fears that close economic ties – workers travelling between Israel and the West Bank – have potentially been one vector for the spread of the virus.”

BBC audiences were not informed that the Palestinian Authority’s continued prioritisation of the payment of salaries for terrorists is one of the factors contributing to its “limited means”.

Marcus went on to give a qualified explanation of the reason for the counter-terrorism measures adopted by Israel and Egypt while whitewashing that terrorism by use of the euphemism “militants”. He failed to clarify that the Gaza Strip was transferred to Palestinian control almost 15 years ago and in theory – though not in practice since the violent Hamas coup in 2007 – is run by the Palestinian Authority.

“But the densely populated Gaza Strip presents an altogether more worrying case. The population there is isolated; the Palestinians are under effective blockade from both Israel and Egypt, who say it is a necessary security measure against militants.

There has been a long-running debate between Israel and the international community as to its abiding responsibilities for the territory. Israel’s troops have left and it insists that it is no longer responsible for events there, which is now the job of the Hamas rulers.

But if the pandemic sweeps through Gaza this may become a very difficult case to argue given the grip that Israel still retains from outside.

No wonder there have been calls from Palestinian experts and humanitarian agencies for the so-called Israeli “blockade” to be lifted, and for Palestinians in both the Gaza Strip, the West Bank and the Israelis to make common cause to fight the pandemic.”

Marcus made no effort to analyse the political motivations behind those “calls” (which, revealingly, do not appear to extend to Egypt) or to examine their validity in light of the fact that there is no restriction on the entry of medical supplies to the Gaza Strip. Neither did he bother to address the obviously relevant issue of what would happen were the blockade lifted, given that Palestinian terror factions in the Gaza Strip clearly have no intention of renouncing the terrorism which caused its implementation and indeed continue to issue threats.

“The head of Hamas in Gaza warned Israel if more ventilators for coronavirus patients were not brought into the Palestinian enclave then his terror group will “take them by force.”

“If ventilators are not brought into [Gaza], we’ll take them by force from Israel and stop the breathing of 6 million Israelis,” said Yahya Sinwar, according to Hebrew media reports.”

Marcus went on to describe well-reported (though not by the BBC) actions which have been publicly praised by the UN as “behind the scenes”.

“It would be nice to think that rivalries could be set aside for the time being during this period of global crisis. Behind the scenes Israel has been transferring some equipment to the Palestinians in the West Bank, and training courses have been running for medical personnel.”

As we see, while the BBC has repeatedly promoted the topic of population density in the Gaza Strip in its coverage of the Coronavirus pandemic, curiously that factor was completely ignored in Jonathan Marcus’ portrayal of outbreaks of Covid 19 in Israel.