BBC Radio 4 has been running a series called ‘Eighteen’ which it describes as follows: 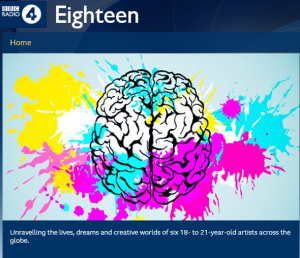 Their stories take us from a teenage Icelandic punk band to an Aboriginal Australian contemporary dancer, from an award-winning Nigerian slam poet to a Palestinian visual artist, and from a South African opera student to a transgender Scottish folk musician.

Presented in immersive binaural stereo, these are the tales of remarkable young people at the dawn of their careers. Told largely through personal testimony and sound montage, Eighteen offers a unique opportunity to hear their voices and stories without mediation – as the intoxicating soundscapes of Cape Town, Lagos, Glasgow and Reykjavik create an intimate portrait of their world.”

“Meanwhile, in Istanbul, the young Palestinian artist Malak Mattar (20) is preparing for an exhibition in Holland – and thinking about life back home on the Gaza Strip.”

The fact that the producer of this series, Steven Rajam, chose to present it “without mediation” means that no effort was made to provide objective background information (such as the rocket attacks and cross-border tunnels which prompted the 2014 conflict) relating to statements heard by listeners such as the following:

“I had this art professor who was coming to my show and he told me Malak it’s good but it’s sad. You are only 15, why so sad? I say why would I be happy? I survived three wars and I’m not yet 16 years old.”

“The day I started painting was actually during the 51 days attack on Gaza Strip in 2014.”

“Malak is of her time and of her generation, brought up in confinement…”

“…the more I travel the more it actually makes me feel so sad that I can’t see anything to indicate my country on the screen that shows people’s destination. What does that mean if I can’t go home?”

The result is BBC Radio 4 listeners were provided with a picture made up of subjective and politicised statements which they were unable to place in their correct context because accuracy and impartiality were sidelined in this programme in favour of “personal testimony…without mediation”.