On April 7th BBC Travel published a long article headlined “A new side to the holy city of Bethlehem” by a writer called Richard Morgan. 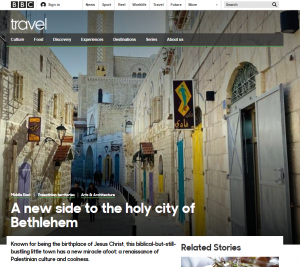 “Known for being the birthplace of Jesus Christ, this biblical-but-still-bustling little town has a new miracle afoot: a renaissance of Palestinian culture and coolness.”

The article includes inaccuracies and distortions ranging from the trivial (for example the description of za’atar as “a thyme-heavy herbal blend” rather than a type of oregano) to the much more significant. One notable aspect is Morgan’s repeated misrepresentation of Bethlehem as being under ‘occupation’.

“…Singer [a café] is in the suburb of Beit Sahour on the walking-distance outskirts of Bethlehem – itself on the outskirts of Jerusalem – in the occupied West Bank, which has been controlled by the Israeli military since the Six Day War of 1967.”

Bethlehem, along with many other towns, has of course been under Palestinian Authority control for almost a quarter of a century. The link in that paragraph leads readers to a long and problematic article written by the BBC’s Jeremy Bowen in 2017.

Despite Bethlehem being in Area A, which is administered solely by the PA, readers are told that:

“…life under Israeli control is particularly evident in Bethlehem…”

Audiences find unevidenced statements such as:

“The first thing the Israeli occupation would want is the end of our art and culture,” said Baha’ AbuShanab, a mop-haired manager at Singer. “That is how you sterilise a society.”

And the far-fetched claim of:

“…women wearing contraband maps of Palestine as dress prints, daring Israeli soldiers to rip them off in confiscation.”

Morgan tells BBC audiences that the Palestinian flag has been “banned since 1967” but fails to inform them that the ban was lifted in 1993 with the signing of the Oslo Accords.

Linking to a BBC report from April 2019 Morgan claims that:

“…in recent months, the Israeli government has embraced annexation of large parts of the occupied West Bank…”

One year on from the pre-election declaration that was the topic of that BBC report, no such annexation has taken place.

Tapping into a favourite BBC theme, Morgan quotes the manager of Banksy’s ‘Walled Off Hotel’ agitprop along with other known political activists such as Leila Sansour and Fadi Kattan.  Another interviewee is introduced as “Bishara Salameh, the 22-year-old, fifth-generation manager of Afteem, a celebrated falafel restaurant just off Manger Square”. Despite his having been around two years old when the second Intifada began, Morgan quotes him on that topic:

““We couldn’t go outside,” Salameh said, referring to curfews that followed the Intifada that ended in 2005. “We lived through the shadow of the Intifada and now we have stepped into the light, our own light.””

Morgan’s whitewashing of Palestinian terrorism means that readers would be unable to understand his statement concerning a café in Beit Sahour:

“Israelis are by and large forbidden by their government from visiting this particular oasis of cosy calm.”

Referring to the anti-terrorist fence he states:

“…an 8m-tall concrete separation barrier was built by Israel in 2002 with the declared aim of stopping suicide bombings and attacks (Israel says it has been an effective deterrent).”

Later in the article he amplifies a false claim made by one of his interviewees:

“…its [Bethlehem’s] uniqueness is that the wall cuts right through the city centre.””

The essence of Morgan’s article is evident in two paragraphs which include overt Nazi analogies:

“This kind of counterintuitive renaissance is surprisingly commonplace where people feel their human rights are under intense restrictions. At Melinka, a former Chilean prison camp, prisoners ran a weekly circus. At Heart Mountain, a US Japanese internment camp, captives sumowrestled and performed Bon Odori folk dances. Even amid the infamous Nazi horror of Auschwitz, prisoners passed around poetry and composed music, risking torture if they were caught. As Salsaa put it: “As soon as there is a space to live, people will fill it with life.”

Andrea Pitzer, author of One Long Night: A Global History of Concentration Camps, agrees. “Liberty of mind becomes important when liberty of movement is gone. It’s like a rejection of detention. It’s not surprising that this accelerated in Bethlehem after the wall went up. If my life is limited, it’ll be the fullest life possible within those limits,” she said. “The restrictions are used to break the will, so it feels almost like a foundational assertion of humanity to still be people capable of adding to the world.”

The implied comparison of Bethlehem to a concentration camp and the suggestion that the anti-terrorist fence was built to limit “liberty of movement” and “break the will” rather than to protect Israeli citizens from Palestinian terrorists is of course both factually inaccurate and deeply offensive.

This is far from the first time (see ‘related articles’ below) that BBC Travel has published partisan politicised articles presented under the veneer of ‘life-style’ content. Usually written by freelancers, such reports often fail to meet the BBC’s supposed editorial standards of accuracy and impartiality.

This particular article includes an insert from BBC Travel stating:

“While travelling is on hold due to the coronavirus outbreak, BBC Travel will continue to inform and inspire our readers who want to learn about the world as much as they want to travel there, offering stories that celebrate the people, places and cultures that make this world so wonderfully diverse and amazing.”

Inaccurate and politically partisan writing that promotes Nazi analogies of course does the exact opposite of that declared intention to “inform…readers who want to learn”.