Next week will mark the centenary of the San Remo Conference during which the Mandates for Palestine, Mesopotamia and Syria were created.

As has been noted here in the past, members of the public searching for BBC content concerning the San Remo Conference will find very little. The timeline in the BBC News website profile of Israel states: 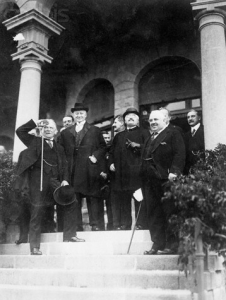 “1920 – San Remo Allied Powers conference grants Palestine to Britain as a mandate, to prepare it for self-rule. European Jewish migration, which increased in the 19th century, continues.”

The timeline in the BBC News website profile of Syria states:

The timeline in the same website’s Palestinian territories profile states:

No further information is given regarding those “Jerusalem riots” – known as the Nebi Musa riots – which are described by Yisrael Medad as follows:

“…between 4-7 April during the Passover Festival and Muslim Nebi Musa Festival (with Good Friday falling two days earlier) tens of thousands of Arabs converged on the Old City of Jerusalem. Inflamed by speeches, they then fell upon the Jews. […]

Five Jews and four Arabs died in the riots. Two-hundred and sixteen Jews were injured, 18 critically, and 23 Arabs, one critically. About 300 Jews were evacuated from the Old City.”

Referring to the same incident, James Sorene notes that:

“The subsequent Commission of Inquiry criticised [British] soldiers for being slow to restore order and negligent in preventing renewed fighting. The controversy led the [British] government to disband the military administration and appoint Sir Herbert Samuel as the first High Commissioner of a new civilian administration.”

The BBC’s brief descriptions of the San Remo conference in the above timelines do not clarify that the Mandate for Palestine created at that conference under the Covenant of the League of Nations (and subsequently included the Treaty of Sèvres) incorporated the Balfour Declaration. The BBC’s claim that Britain’s task was “to prepare it [Palestine] for self-rule” erases the fact that the text of the Mandate charged the Mandatory with creating conditions “as will secure the establishment of the Jewish national home”.

Two and a half years ago the BBC devoted copious coverage to the centenary of the Balfour Declaration, overwhelmingly framing it as an ‘injustice’ and promoting the view that Britain should apologise for the century-old document.

To date, however, BBC audiences have seen no coverage of the centenary of the San Remo Conference at which the Balfour Declaration was incorporated into the Mandate for Palestine that was unanimously approved two years later by the Council of the League of Nations.

Obviously BBC audiences cannot fully understand the history behind the much reported Arab-Israeli conflict if they are denied the information which explains how an expression of British policy – which the corporation did consider it appropriate to cover very widely in the autumn of 2017 – became a binding international agreement.