Readers were told that: [emphasis added] 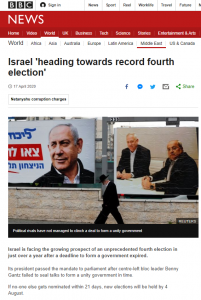 “Israel is facing the growing prospect of an unprecedented fourth election in just over a year after a deadline to form a government expired.

Its president passed the mandate to parliament after centre-left bloc leader Benny Gantz failed to seal talks to form a unity government in time.

If no-one else gets nominated within 21 days, new elections will be held by 4 August.”

“Mr Gantz’s mandate expired on Wednesday night and the task of producing a new candidate for PM passed to the Knesset (parliament) on Friday morning.

If a majority of MPs in the 120-seat assembly choose a new nominee, that person will have 14 days in which to try to form a government.

Should they fail, or if no-one is put forward, the Knesset will face dissolution and elections will be called by 4 August.”

Israeli law defines a period of up to 90 days between the dissolving of the Knesset and an election.

The Jerusalem Post reported a statement put out by the office of the President:

“Rivlin’s office released a political timetable earlier on Thursday, laying out May 7 as the date by which an MK must be tasked by the Knesset with forming a government, May 8 as the date for informing the Knesset speaker as such, and August 4 as the date for the next election, allowing for a three month campaign.”

Apparently relying on local media reports which it is doubtful that the BBC has independently confirmed, the report states:

“The discussions are believed to be stuck on a dispute over Mr Netanyahu’s support for legislation to allow the government to overrule High Court decisions, including forcing him to resign.”

The BBC did not bother to clarify that such legislation has not been passed by the Knesset to date.

“He [Netanyahu] was meant to go on trial earlier this month, but it was postponed when the courts were ordered closed (apart from in certain cases) because of the coronavirus crisis.”

That court case was scheduled to open on March 17th rather than “earlier this month” (April).

As we noted when the BBC previously claimed that courts in Israel are closed (see ‘related articles’ below), that is not the case. The courts and employment tribunals are not closed: their activity has been amended to meet Ministry of Health guidelines and hearings are being held in cases deemed urgent.

To put the BBC’s reference to “certain cases” into perspective: on April 5th (before the Pessah holiday) the Judiciary reported that during the previous week 107 cases had been opened in the Supreme Court with 38 sessions held and in the other courts, 12,102 cases had been opened, 7,741 closed and 45,956 rulings given. The day before this BBC report was published a High Court hearing was live streamed as part of a pilot.

Since late March BBC Watch has contacted the BBC on several occasions and via multiple channels to request correction to the repeated claim that courts in Israel have been closed. We have yet to receive a response and as we see, the corporation continues to promote that inaccurate claim.

The BBC, Coronavirus and population density