On April 23rd a report by BBC Technology was published on the BBC News website’s ‘Middle East’ page under the headline “Coronavirus: Israel halts police phone tracking over privacy concerns”.

“The use by Israel’s police of mobile-phone location data to enforce quarantine has been halted because of privacy concerns.

The government had approved the use of such data for a limited time, to make sure those ordered to self-isolate were doing so.

But now an oversight group in Israel’s parliament blocked an attempt to extend the emergency measures past this week.”

However the image chosen to illustrate the article has nothing whatsoever to do with the Foreign Affairs and Defence committee’s decision not to move forward with the proposed legislation. 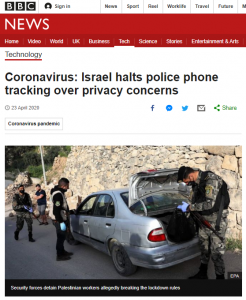 Captioned “Security forces detain Palestinian workers allegedly breaking the lockdown rules”, the image is credited to EPA. The photograph appears on the EPA website along with several others taken at the same scene.

However the original caption reveals that the photo was taken in Hebron and the security forces are Palestinian. 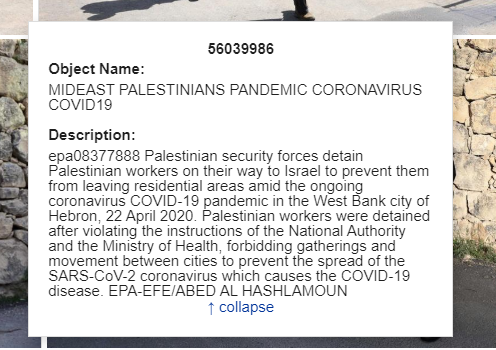 The BBC has editorial guidelines on ‘Stills, photographs and images’ which, under the heading “Accuracy and Impartiality” state:

“Care should be taken not to use images to mislead the audience.”

The use of a photograph taken in a location under Palestinian Authority control showing Palestinian security forces and Palestinians to illustrate an article – tagged ‘Israel’ – about a decision made by an Israeli Knesset committee is obviously as misleading as it is bizarre.