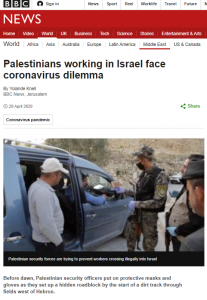 Coomarasamy: “When the Coronavirus pandemic first hit Israel and the Palestinian territories the United Nations praised their cooperation in dealing with a common threat. But, as Palestinian workers in Israel have brought the virus back to the occupied West Bank, a political row has broken out that threatens to hit the economies on both sides and to undermine efforts to stop the spread of Covid-19.”

That “political row” was subsequently portrayed as follows by Knell:

Knell: “Last month a deal was struck so tens of thousands of Palestinian workers could cross into Israel to stay temporarily. Amid the Covid-19 lockdowns there was recognition of their vital economic importance. But as Israel dealt with a larger outbreak of the virus, soon most of the West Bank cases were being linked to returning workers and that led to criticism from the Palestinian Authority.”

Knell’s portrayal of the same topic in her written report reads as follows:

“But a political row broke out after reports that some Palestinian workers in Israel had no decent accommodation and the circulation of social media footage showing a sick man, who later tested negative for Covid-19, being dumped at a checkpoint by Israeli forces.

The PA government spokesman accused the Israeli authorities of “racist and inhumane” behaviour.

Amid fears of a crisis that would overwhelm the local health system, Prime Minister Mohammed Shtayyeh called on workers to come home.

“The economy of Israel is not as precious as the lives of our children,” he said.”

Although Knell blindly repeated the Palestinian version of that month-old story about a “sick man…being dumped at a checkpoint”, the facts are rather different. As the Times of Israel reported at the time, the man was in Israel illegally and was tested before being sent back to PA controlled territory.

“Police spokesman Micky Rosenfeld emphasized Ghannam was in Israel without a permit but did not clarify whether Israel had made efforts to coordinate his return to the West Bank with the PA.

“Police received information from Ichilov [Hospital] about an illegal Palestinian worker who arrived at the hospital and requested treatment,” he said.

“He was checked in the hospital and released and was confirmed to not have the coronavirus in anyway whatsoever,” he added, without stating whether he was diagnosed with any other illness. “Police escorted the man to the Maccabim security crossing as he was an illegal worker.””

In both her reports Knell included a response from COGAT’s Major Yotam Shefer.

“These remarks, they’re just misleading and even encouraging incitement, I’d say, in the Palestinian people,” says Major Yotam Shefer from the Co-ordination of Government Activities in the Territories (Cogat). “We’ve been doing really a joint effort to combat this virus and it’s a common enemy.””

BBC audiences would however be unable to understand Sheffer’s use of the term incitement because they were told nothing of the background to what Knell euphemistically portrayed as “criticism” and a “political row”.

The PA’s dominant party Fatah has accused Israel of launching “a biological war against Palestine” and claimed that it “strives to spread Corona in Palestine”. Senior PA officials have used antisemitic tropes and accused Israelis of deliberately spreading the disease. Knell, significantly, chose to shield her audiences from those facts.

Knell: “Economic reliance on Israel is a sensitive issue for the Palestinians in their decades-old conflict. This pandemic, taking no account of the barriers between the two sides, has only made that worse.”

Readers of her written report were told that:

“Usually, more than 100,000 Palestinians with permits work in Israel and Israeli settlements, earning far better wages than they could at home. Many others have informal jobs.

Their income is vital to the West Bank economy, weakened by decades of military occupation.”

“The desperation of workers to return to their jobs, even during a pandemic, has underlined the economic reliance of the Palestinians on Israel – a sensitive issue in their decades-old conflict.”

By “informal jobs” Knell means illegal workers who enter Israel without a permit. Those permits were introduced because of Palestinian terrorism – a topic in which she apparently has no interest because in both the written and audio report she fails to question the Palestinian Authority security forces interviewee who states that their mission to prevent Palestinians from entering Israel illegally will only continue “until this pandemic is over”.

Notably, Knell’s sole explanation for the state of the Palestinian Authority’s finances is “decades of military occupation”. Notwithstanding the fact that the PA has had economic control over Areas A & B for over a quarter of a century, Knell had nothing to say about the relevant issues of its mismanagement of the economy and its prioritisation of salaries for terrorists.

Once again we see that Yolande Knell’s reporting frames the story in a manner which amplifies Palestinian talking points while failing to provide BBC audiences with the full range of relevant information on issues such as incitement and rewards for terrorism.