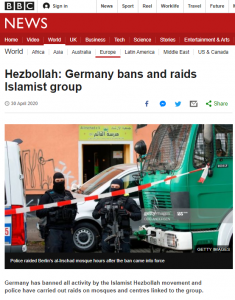 As is so often the case in BBC reporting on Hizballah, the article promotes a toned-down view of the terrorist organisation and its activities.

The report perpetuates the European myth of separate ‘political’ and ‘military’ wings to Hizballah. [emphasis in bold added]

“Until now the political wing of the Shia Lebanese group, backed by Iran, was able to operate on German soil while its military arm was banned. […]

The EU has Hezbollah’s military wing on its list of terror organisations but not its political wing. Earlier this year the US ambassador to Berlin, Richard Grenell, accused the EU of maintaining an “artificial distinction” between the two parts.

The UK dropped the distinction in 2019, saying it could no longer distinguish between the two. The Netherlands, Japan, the US and Canada are among other countries that ban both wings.

However, French President Emmanuel Macron made clear last year that he would continue to have contact with Hezbollah’s political wing.”

As the CST documented in 2018 (see pages 8 & 9 here), Hizballah leaders have repeatedly rejected that false distinction.

The ITIC notes that:

Also noteworthy – but predictable – is the fact that the BBC report downplays the issue of Iranian sponsorship of its Lebanese arm.

“Until now the political wing of the Shia Lebanese group, backed by Iran, was able to operate on German soil while its military arm was banned.”

The BBC’s report likewise downplays Hizballah’s record of international terrorism and the role it played in the establishment of the current Lebanese government.

“Hezbollah – which means Party of God – wields considerable power in Lebanon and is seen as a key supporter of its current government. It has been blamed for numerous attacks against Israel, the US and Jewish figures and institutions.”

When that government was formed in January of this year the INSS noted that:

“…the composition of the government was decided by parties in Hezbollah’s camp – the March 8 camp – which spent a long time wrangling over the ministerial appointments while taking care to distribute portfolios to their favored candidates in accordance with sectarian-partisan priorities. Only two ministers are identified with Hezbollah and two with its Shiite partner, the Amal movement. However ten ministers represent Hezbollah’s Christian partners, the Free Patriotic Movement (FPM) led by Gebran Bassil, the unpopular former foreign minister and son-in-law of President Michel Aoun; and the Marada Movement.”

Readers of the BBC’s report are informed that:

“The ban will enable authorities to put a stop to anti-Israel marches and the use of anti-Semitic slogans, observers say. Hezbollah flags and anti-Israel banners often appear at the annual al-Quds march in Berlin.”

The identity of those quoted “observers” is not provided but obviously the German government’s move against Hizballah activity will not – as the BBC’s statement claims – ban anti-Israel demonstrations or antisemitic slogans in Germany. As reported by DW:

“The ban essentially criminalizes public expression of support for Hezbollah within Germany. Followers can no longer display the flag of the Lebanese militia, a green rifle on a yellow background.”

“The move means that Hezbollah symbols are banned at gatherings and in publications or in the media and Hezbollah assets can be confiscated, said the ministry, adding as it is a foreign organisation, it is not possible to ban and dissolve it.”

In short, this BBC report misleads audiences with regard to the consequences of the German government’s ban and downplays the activities of the terror organisation while providing readers with a link to the corporation’s profile of Hizballah which has not been updated for over four years and hence provides no information concerning the most recent designations of the organisation, including that of the UK.