The April 29th edition of the BBC World Service radio programme ‘Witness History’ – titled “The assassination of the UN’s first Middle East mediator” – was described as follows in the synopsis: 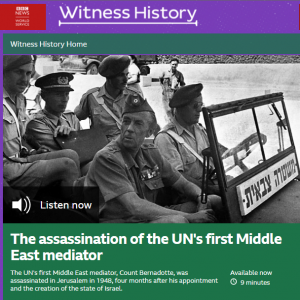 “The UN’s first Middle East mediator, Count Folke Bernadotte, was assassinated in Jerusalem in 1948. A Swedish diplomat and member of the Swedish royal family, Count Bernadotte was killed by Jewish extremists four months after being appointed to try to bring peace to what was already proving to be one of the most intractable conflicts in the world. Louise Hidalgo has been talking to his son, Bertil Berndotte, about the count and his mission.”

The historical background to the programme’s subject matter was introduced by presenter Louise Hidalgo thus:

Hidalgo: “In May 1948 two events occurred that would change the Middle East forever. On the afternoon of Friday the 14th of May, Jewish leaders declared a Jewish State of Israel in what was then called Palestine. Hours later, on the strike of midnight, more than a quarter of a century of British administration of Palestine came to an end.”

Listeners were not told that the end of British administration of the Mandate for Palestine had been included in UN GA resolution 181, passed nearly six months earlier in November 1947.

“The armed forces of the mandatory Power shall he progressively withdrawn from Palestine, the withdrawal to be completed as soon as possible but in any case not later than 1 August 1948.”

On December 11th 1947 the Secretary of State for the Colonies informed parliament that Britain’s administration of the Mandate would terminate on May 15th 1948.

At no point in the programme were listeners informed that the unfulfilled task entrusted to Britain as administrator of the Mandate for Palestine included “placing the country under such political, administrative and economic conditions as will secure the establishment of the Jewish national home”. Hence listeners had no idea that “what was then called Palestine” had been assigned by the League of Nations to the creation of the Jewish national home when they heard Hidalgo’s subsequent statements.

Hidalgo: “As the British left, the war that had been simmering for months between the Jews and the Palestinians filled the vacuum.”

In fact, the conflict that began immediately after resolution 181 was passed in November 1947 did not involve just “the Jews and the Palestinians”: foreign forces in the form of the Arab Liberation Army also took part.

Hidalgo: “On the 15th of May five Arab armies invaded and it fell to the United Nations – then just three years old – to try to negotiate a peace. The United Nations had agreed a plan the previous year to partition Palestine into a Jewish state and an Arab state and to put Jerusalem under international control. The Jews had agreed the plan, the Palestinians had opposed it. Fighting had intensified even before the British left. Now they’d gone.”

Listeners were not informed that the 1947 Partition Plan (UNGA resolution 181) was non-binding and in fact no more than a recommendation, the implementation of which depended upon the agreement of the parties concerned. The plan was rejected – and thus rendered irrelevant – by the Arab states as well as the Palestinian ‘Higher Arab Committee’ rather than just by “the Palestinians” as claimed by Hidalgo.

With regard to Bernadotte’s two proposals, listeners were told by his son that the first plan was devised by Bernadotte’s aide Ralph Bunche.

Bernadotte: “It was his plan that my father adopted and was very criticised for. But he then changed to plan number two but it was already a bit too late because the hatred had already started. The point of irritation was that the first plan gave Jerusalem to the Arabs and my father’s second plan – which was really more my father’s plan – was that Jerusalem should be taken out of the fight. It would be a neutral city administered by the United Nations. But even that was unaccepted, from both sides.”

Listeners were not informed that both the first Bernadotte plan and the second Bernadotte plan called for Israel to relinquish the Negev and Jerusalem, leaving it with a fraction of the territory allocated by the League of Nations to the creation of the Jewish national home. 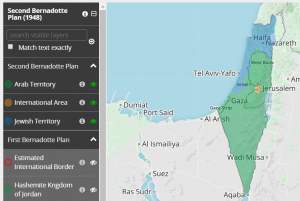 Avoiding the topic of British restrictions on Jewish immigration before, during and after the Second World War, Hidalgo went on to note another aspect of the second Bernadotte plan:

Hidalgo: “Jews had been emigrating to Palestine since the late 19th century and calls for their own homeland had been made more urgent by the Holocaust – the Nazi killing of six million Jews during World War Two. But for Palestinians this meant losing land and villages. They called the creation of Israel al Naqba – the catastrophe. […] The new plan that Folke Bernadotte was working on that summer as well as making Jerusalem a neutral city also sought to deal with the issue of the tens of thousands of Palestinians who’d fled or been expelled from their homes during the fighting. Bertil says the issue of refugees was particularly important to his father.” […]

Listeners heard Bernadotte state that his father’s proposal “insisted…that the Palestinian Arabs should have the right to return to their homes”.

Ignoring the relevant issue of Jews displaced from their homes in places such as the Old City of Jerusalem and Gush Etzion during the same fighting (as well as the hundreds of thousands of Jewish refugees from Arab lands), Hidalgo told listeners:

Hidalgo: “That would have had deep implications for the new Jewish state and both Jewish and Arab public opinion were incensed by the proposals for Jerusalem.”

Making no effort to explain those “deep implications”, Hidalgo moved on to the topic of the assassination of Bernadotte in September 1948. Listeners were not informed however that days after the assassination the Israeli authorities enforced the final disbanding of Lehi in Jerusalem.

While the BBC World Service radio’s pick ‘n’ mix approach to Middle East history is by no means novel, it continues to deprive audiences of an accurate and impartial view of events which would enhance their understanding of the background to so many of the contemporary stories it reports.

WHAT DOES THE BBC TELL AUDIENCES ABOUT THE SAN REMO CONFERENCE?