On April 2nd the BBC News website published a report titled “Coronavirus: Israeli spyware firm pitches to be Covid-19 saviour” by Rory Cellan-Jones of BBC Technology which remained on the ‘Middle East’ page until April 8th.

On April 27th yet another report by BBC Technology was published on the BBC News website’s ‘Middle East’ page under the headline “Coronavirus: Israeli court bans lawless contact tracing” where it remained until April 30th.

So as we see, between March 17th and April 30th, visitors to the BBC News website’s ‘Middle East’ page found reports relating to Israel and phone tracking to identify contact with Covid-19 carriers on over half of those 45 days.

Apparently though the BBC News website does not consider that audiences have heard enough on that topic because less than two weeks after the most recent article last appeared – on May 12th – yet another item by Tom Bateman was published under the headline “Coronavirus: Israel turns surveillance tools on itself”.

The caption to the main image used to illustrate that report reads: 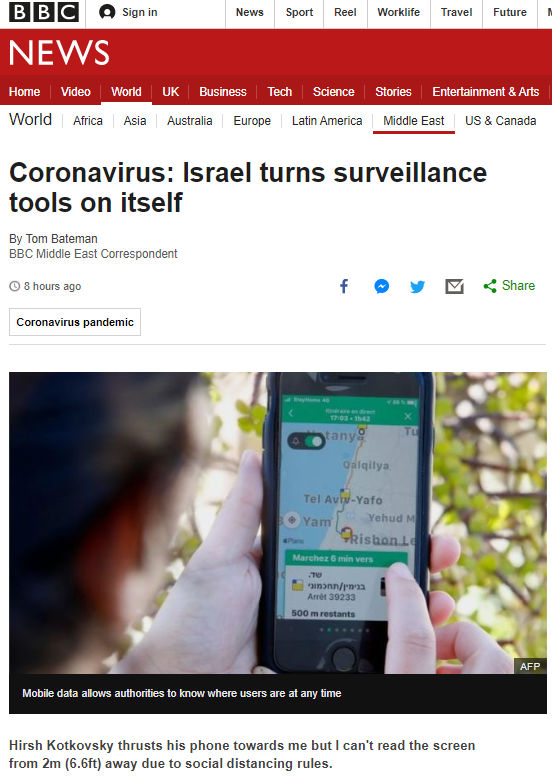 However the original caption to the photograph taken by AFP photographer Jack Guez reads:

“A woman checks on her phone the Moovit mobile transport application in central Israeli city of Netanya on May 4, 2020.” 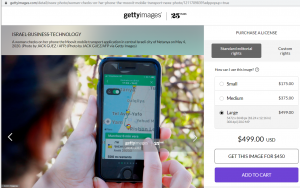 In other words, that image relates to the story of Moovit being bought by Intel on May 4th rather than to the subject matter of Bateman’s report.

Bateman’s report tells readers very little about the comparatively low number of serious and fatal cases of Covid-19 in Israel.

“In the fight to contain the coronavirus, Israel’s internal security agency – the Shin Bet – was empowered to use covert systems to track people’s movements.

The Middle East’s cyber-superpower has made extensive use of surveillance technology to try tackle Covid-19, as countries around the world grapple with the trade-off between privacy and monitoring infection.

The Shin Bet can access the location data of millions of mobile phone users to trace those who have been in proximity to confirmed patients. Israel credits the system, among other measures, with reducing the rate of infection.

The number of new cases reported each day is now down to double digits. Its death toll has also remained relatively low, currently standing at 252.”

“The agency believes the system has located almost 4,000 individuals who later tested positive – around a quarter of the confirmed Covid-19 cases in Israel.”

According to a report published by the Times of Israel over a week before the appearance of Bateman’s article, the number of people who tested positive was considerably higher:

“Sigal Sadetsky, head of public health services at the Health Ministry […] presented data that 5,516 Israelis tracked by the Shin Bet turned out to have the virus, seven percent of the total number of people who were informed by text message they had been in proximity to someone sick with COVID-19.”

Predictably, Bateman’s main focus is that of the “controversy” surrounding the phone tracking.

“But the unprecedented expansion of the Shin Bet’s powers has been the subject of controversy, including a Supreme Court challenge, questions over its accuracy, and accusations from doctors that it creates a distraction from testing for the coronavirus.

The agency, now acting as a tool of public health enforcement, is usually tasked with preventing attacks against Israelis and routinely monitors Palestinians in the occupied territories.” [emphasis added]

Bateman provided no support for the claim that the Shin Bet “routinely monitors Palestinians” – rather than those suspected of engagement in violence and terrorism.

His report includes an interview with a former Shin Bet officer and quotes the same researcher at Toronto University’s ‘Citizen Lab’ as was featured in Rory Cellan-Jones’ April 2nd article.

“Others believe mass surveillance programmes scrambled to deal with the pandemic are rife for abuse around the world. “What scares me is that, at least for now, the norm is suddenly changing,” says cybersecurity analyst John Scott-Railton of the University of Toronto’s Citizen Lab.

“People who have been [quietly] doing these things which are highly questionable are suddenly saying: ‘Look, we’re your saviours here.'””

However Bateman provides readers with comparatively little information – once again – about the safeguards put in place.

“A committee of the Knesset, Israel’s parliament, has been overseeing the Shin Bet program and authorising its continued use. Israel’s ministry of health told the BBC that it was continuing to use the data. It declined to answer a question about privacy concerns.

The Shin Bet has previously said individuals’ data will be used only for providing instructions to save lives, and will be deleted 60 days after the coronavirus emergency is lifted.

Ministers have pledged to underpin the programme with legislation after a Supreme Court challenge by human rights groups.”

Readers were not informed that on May 5th the Knesset subcommittee approved a three-week extension to the programme which, if not further extended, will expire on May 26th or that the 60 day usage cited by Bateman is for the Ministry of Health rather than the Shin Bet.

“The tracking program was approved through emergency regulations in mid-March, but the High Court of Justice ruled last month that it could not continue beyond April 30 unless a legislative process was commenced to cement the practice in law. However, the court granted the government the right to approve an extension of the tracking measures on condition that it began the legislative process.

Under the government’s emergency regulations, the Shin Bet is not permitted to continue using the data after the program ends, though the Health Ministry is allowed to use the information for an additional 60 days for research purposes, presumably to retrace the path of the outbreak.”

In other words, the subject matter of Bateman’s 1,026 word-long article (along with several previous BBC reports) is a phone tracking system which is currently set to expire in two weeks’ time.