In addition to his May 12th written report about phone tracking to identify contact with Covid-19 carriers in Israel (discussed here), the BBC Jerusalem bureau’s Tom Bateman also produced an audio version which was aired (from 2:44:54 here) on BBC Radio 4’s ‘Today’ programme on the same day.

The item was introduced by programme presenter Mishal Husain as follows: [emphasis in italics in the original, emphasis in bold added]

Husain: “It is nearly two months since the Israeli government approved emergency measures to deal with Coronavirus which included using the security agencies to track suspected cases through mobile phone data. New cases are now down to double digits with an overall death toll of just over 250. As our Middle East correspondent Tom Bateman reports, the continuing involvement of the domestic intelligence service is proving controversial.”

Bateman began his report with a visit to a pizza parlour in Tel Aviv run by a person he named as Aron Pavoncello and statements which are equally applicable to millions of small businesses around the globe.

Bateman: “The lockdown’s been crushing the café’s takings and Aron is paying even more to get the food out.”

Listeners soon discovered the aim of Bateman’s visit to the pizza maker.

Bateman: “We’re here to ask him about state surveillance: one way Israel sees as key to tracking the virus and getting its economy back from the depths of lockdown. Aron isn’t onside.”

Pavoncello: “No I don’t agree because I’m not a terrorist so why should I sign a paper that’s use to treat terrorists when I make pizza?”

Listeners got no explanation of that opaque claim regarding the signing of a paper before Bateman went on to claim that a tracking system which has been the topic of several BBC reports, countless Israeli media items, a High Court case and repeated debates in a Knesset subcommittee is “covert”.

Bateman: “The heat in this controversy is because it’s covert.  Since March the Shin Bet has scoured troves of mobile phone location data. Some 80 thousand people have had messages saying they’ve been close to a Coronavirus patient. The agency tasked with thwarting attacks against Israelis – that routinely monitors Palestinians – is now a tool of public health enforcement.”

As in his written report, Bateman provided no support for the claim that the Shin Bet “routinely monitors Palestinians” – rather than those suspected of engagement in violence and terrorism – before going on to interview the former Shin Bet officer who also appeared in his written report.

Bateman: “He slips his surgical mask under his chin and accepts there’s been a vast expansion of snooping powers.”

Bateman’s sole nod to the obviously relevant topic of the safeguards put in place was as follows:

Bateman: “There’s oversight, he points out, in Israel’s parliament. The government, which says the data will later be deleted, is to back up the programme in law.”

Clearly that does not adequately clarify to audiences how the system works or what safeguards were put in place.

Listeners then heard from the photographer who also featured in Bateman’s written report.

Bateman: “He was ordered by a government text in March to quarantine for two weeks. Data gleaned, he was told, from the Shin Bet. He questions the data’s accuracy. He doesn’t think there was a Coronavirus case at the wedding he worked at that day and he didn’t develop symptoms. Still, he’s in favour.”

Bateman next moved on to another location.

Bateman: “An alarm goes off in the police headquarters. A screen shows maps where they follow up isolation orders. But behind the moving maps and the data walls there are other reasons for Israel’s self-declared success so far, including a young population and a rapid lockdown. Critics of the spy programme have gone to court, worried one emergency might lead to another and about the scope for misuse.”

While there are indeed multiple factors which contributed to Israel’s success in containing the pandemic with, to date, 30.04 deaths per million (in contrast, for example, to 481.57 deaths per million in the BBC’s home country), why Bateman chose to use the phrase “self-declared” is unclear. 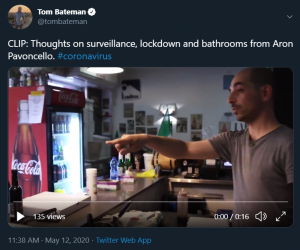 Bateman then went back to the pizza maker, allowing him to promote entirely fictitious allegations.

Pavoncello: “They ask to give up everything; your privacy, your basic needs, your basic saying. Sorry for the word but I want to take a [bleeped out] in the bathroom, I want to do it alone. I don’t want someone looking at me.”

Of course nobody is “looking at” Israelis using the bathroom or asking them to give up privacy, basic needs or freedom of speech. Tom Bateman was apparently so much at ease with his own amplification of those falsehoods that in addition to including them in his radio report, he decided to further promote them on Twitter.

Bateman: “But Israel’s government says nearly four thousand patients – a quarter of the country’s known Coronavirus cases – have been identified by the Shin Bet system. It believes surveillance is saving lives.”

As noted here when Bateman made the same claim in writing, according to a report published by the Times of Israel over a week before the appearance of Bateman’s article, the number of people who tested positive was considerably higher:

“Sigal Sadetsky, head of public health services at the Health Ministry […] presented data that 5,516 Israelis tracked by the Shin Bet turned out to have the virus, seven percent of the total number of people who were informed by text message they had been in proximity to someone sick with COVID-19.”

The aim of this report from Bateman is all too obviously to once again focus on controversy and sensationalist allegations rather than to provide the BBC’s domestic audiences with a measured and objective account of one aspect of another country’s strategy for dealing with the Covid-19 pandemic.