The lead item in the May 17th evening edition of the BBC World Service radio programme ‘Newshour’ was presented as “New Israeli government set to annex parts of Palestinian territories” [sic]. 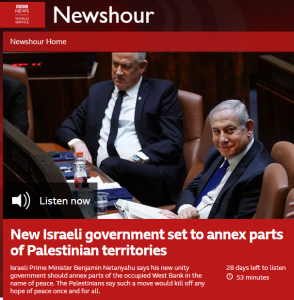 “Israeli Prime Minister Benjamin Netanyahu says his new unity government should annex parts of the occupied West Bank in the name of peace. The Palestinians say such a move would kill off any hope of peace once and for all.”

The long item (from 00:38 here) was introduced by presenter James Menendez: [emphasis in italics in the original, emphasis in bold added]

Menendez: “But first we’re going to head to Israel where a government’s finally been sworn in after three elections failed to produce a working coalition. The deadlock was only broken when Benjamin Netanyahu of the Likud party and his main rival Benny Gantz, leader of the Blue & White alliance, agreed to share power. That will enable Mr Netanyahu to remain as prime minister for the next 18 months despite a corruption trial starting in a week’s time. Well, before the swearing-in he said it was time to apply Israeli sovereignty over Israeli settlements in the occupied West Bank – or what he called Judea and Samaria – something that’s illegal under international law.”

Obviously that highlighted partisan claim from Menendez did not enhance audience understanding of the topic as required by BBC editorial guidelines on impartiality. Rather, it sought to influence the views of listeners early on while concealing the fact that the status of the territory concerned is disputed and subject to negotiation.

After listeners had heard a voice-over version of part of a speech made by Netanyahu prior to the swearing-in ceremony, Menendez went on:

Menendez: “In a moment we’ll get reaction from the Palestinians but first our Middle East correspondent Yolande Knell on how the new unity government in Israel will actually work.”

Listeners heard less than two minutes of explanation about the new government from Knell before Menendez brought the conversation back to the item’s real purpose.

Menendez [03:21]: “And tell us a bit more about this pledge to annex parts of the West Bank. What does that entail exactly?”

Knell: “Well this is a promise that Mr Netanyahu made to his Right-wing nationalist base on the campaign trail. And actually the agreement to set up this government sets the 1st of July as a starting date for cabinet discussions; it’s something that’s actually written into the agreement. Then in his address to the Israeli Knesset before the swearing-in ceremony of the new government, Mr Netanyahu spoke about this as a time for anyone who believes in what he called our rights in the Land of Israel to join his government to bring about what he said was a historic process. This issue, he said, was on the agenda because he had pushed for it personally. And there was lots of heckling at that point from Arab-Israeli members of the Knesset. This is of course something that’s very strongly rejected by the Palestinians, by many in the international community. The settlements are considered illegal under international law although Israel disputes this, now has US backing for its position. It also wants to annex the Jordan Valley. Israel says that’s a necessary area for its security. These are all parts of the West Bank that the Palestinians want for their hoped-for future state.”

Menendez: “Are there voices in Israel warning against this?”

Knell: “There are. Even from high up in the security establishment there are those that argue that this threatens Israel’s peace deals with Egypt and with Jordan. We had King Abdullah of Jordan last week saying that he’s studying all options for response on this. There’s lots of worries about the negative effect of the prospects on any eventual two-state solution to the conflict with the Palestinians. This idea that hopes could be jeopardised of Gulf allies of the US and Israel being brought together – that’s a real pet idea of the Trump administration. And this could endanger ceasefire understandings in Gaza. It could topple the Palestinian Authority; that’s another fear as well. That could lead to instability and violence in the West Bank and what a lot of security officials in particular in Israel are pointing out is why take this risk because already Israel does have full security and administrative control of these parts of the West Bank that we’re talking about.”

With listeners having heard that long list of negative views of the possibility of Israeli civil law being applied to communities located in Area C, one might have thought that – in the interest of the BBC’s supposed ‘impartiality’ and its obligation to “ensure a wide range of significant views and perspectives are given due weight and prominence” – Menendez’s next interviewee would be someone presenting an alternative view. That, however, was not the case.

Instead ‘Newshour’ chose to interview the head of the Palestinian mission in the UK that earlier on the same day came up with this: 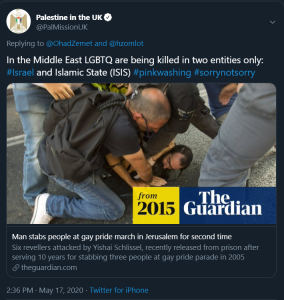 Menendez [05:25]: “So what is the Palestinian response to that pledge to annex parts of the occupied West Bank? Husam Zomlot is head of the Palestinian mission to the UK and a senior advisor to President Abbas.”

Zomlot: “We said clearly that it would be a declaration – a legal declaration – of making all the agreements void, of actually ending the prospects for a two-state solution. It’s a disregard to the regional stability and we have all heard the king of Jordan, King Abdullah, only yesterday conforming that this will have severe consequences on the relationship with Jordan. And this is such a violation of the basic international rules, law. Israel has the full support of the Trump administration when it comes to this very illegal act; an act that is [unintelligible] described in international law as a war crime. And it tells you also that Israel is using the Corona pandemic, thinking that the world is distracted and there will be attention on other issues.”

Given his own earlier partisan portrayal of “international law” it is hardly surprising that Menendez failed to challenge those allegations from Zomlot but he also refrained from questioning the falsehood that application of Israeli law to parts of Area C would bring an end to “prospects for a two-state solution”.

Menendez: “How much will actually change though on the ground? Israel of course doesn’t regard those settlements as illegal. They are already there. It’s changing the terms of its sovereignty over those settlements. It’s not actually going to make, in real terms, much difference is it?”

Zomlot: “No it will make all the difference because there is a big difference between a de facto control and for the last 27 years we have been in a political process to negotiate how to end that de facto control because it’s very well defined in international law, in UN Security Council resolutions, as a military occupation that must end. A sovereign independent State of Palestine must be established on the territory of 1967 borders. Now to make that de facto control a de jure according to Israeli law, that changes the whole story and that tells you firmly about the real intention of Israel to turn what’s supposed to be a temporary military occupation into a permanent situation and that would make any future political process about a two-state solution void and meaningless and that’s why many international actors including the European Union and the United Kingdom and many other countries are saying should this happen that will spell the end of the two-state solution as has been espoused by the international community.”

Menendez made no effort to challenge the risible claim that the PLO – which has repeatedly refused peace offers – has been negotiating “for the last 27 years” or to clarify to BBC audiences that there is no such thing as “1967 borders” and what Zomlot is actually referring to are the ceasefire lines of 1949 which were defined – on Arab insistence – as not being borders.

Menendez: “But yeah, but if there were to be a two-state solution – I know it looks a very distant prospect – those settlements would be under Israeli control anyway, wouldn’t they?”

Zomlot: “Said who exactly? No settlements…”

Menendez: “No I mean realistically. Many of them have been there for a long time and they’re not going away, are they?”

Zomlot: “No James. You don’t sit on a table to decide to how to share a piece of pizza and then I start eating your pizza while we’re talking. This is not genuine. This is not real. The world has recognised the State of Israel. We the PLO has recognised the State of Israel on the 1967 borders. That’s 78% of Palestine. We have accepted to establish a state on the 22% with East Jerusalem as its capital. Now what Israel is talking about is annexing areas to the far east of this 22%, that’s the borders to Jordan. What Israel is proposing to annex is the heartland of this 22%. It would make it strategically impossible a state that would be like a Mickey Mouse, it will not be contiguous, it will have no prospects, no access to the outside world, no access to real sovereignty.”

Making no effort to challenge Zomlot’s egregious claim that ‘Palestine’ includes all Israel’s territory, Menendez closed the interview at that point.

The take-away messaging which would be understood by most listeners to this interview is that Israel intends to do something which is ‘against international law’ and which would destroy the chances of a two-state solution that is supported – indeed demanded – by the Palestinians and the ‘international community’. Given his rich previous experience of unchallenging BBC interviews, Zomlot could be confident that his recycled talking points would not come under any serious scrutiny but it is worth remembering that just seven months ago, he gave a different audience a more realistic view of his and his colleagues’ stance, which we summed up as follows:

“…Zomlot is saying that although the Palestinians would prefer a more ‘desirable’ one-state option which would eradicate the Jewish state and bring an end to Jewish self-determination, they are prepared to settle in “the immediate future” for their partisan interpretation of a two-state solution which – notably – does not include recognition of Israel as the Jewish state because they consider all of Israel to be “rightly” theirs.”

This long ‘Newshour’ item obviously failed to include the “range of views” demanded by BBC editorial guidelines and made no attempt to provide listeners with the full background information necessary for proper understanding of the topic under discussion. It represents yet another BBC effort to preemptively frame a story which has not yet even happened but nevertheless was the subject of two additional radio items and four written reports (see ‘related articles’ below) between May 13th and May 17th alone.