On May 15th a report headlined “Israel gets first Ethiopia-born minister, in Pnina Tamano-Shata” was published on the BBC News website’s ‘Middle East’ page.

The caption to the main image illustrating that otherwise reasonable report reads “Pnina Tamano-Shata, a former journalist, was the first Israeli MP born in Ethiopia”. 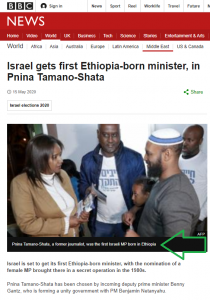 As the GPO pointed out two days later, Ms Tamano Shata is not “the first Israeli MP born in Ethiopia”. 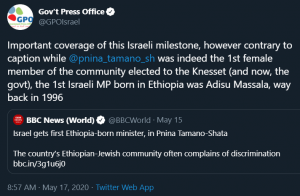 CAMERA UK has contacted the BBC regarding the inaccurate claim in that photo caption.