May 20th saw the appearance of an article headlined “Palestinians ‘ending accords with Israel and US’ over annexation plan” on the BBC News website’s ‘Middle East’ page which opened as follows: 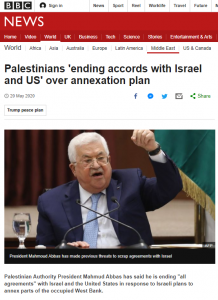 “Palestinian Authority President Mahmud Abbas has said he is ending “all agreements” with Israel and the United States in response to Israeli plans to annex parts of the occupied West Bank.”

Such “plans” have of course yet to be presented to the cabinet (with the earliest date for doing so set at July 1st) and if approved would subsequently require further approval by the Knesset’s Foreign Affairs and Defense Committee as well as the Knesset. The BBC’s report did rightly inform readers that:

“Similar warnings in the past have ultimately not been followed through.”

The article continued with a portrayal of the US ‘Peace to Prosperity’ plan which excluded its proposed land swaps:

The move would be in line with US President Donald Trump’s “vision for peace” between Israel and the Palestinians, which was unveiled in January.

Mr Trump’s plan also envisages a Palestinian state in about 70% of the West Bank, all of Gaza, and with its capital on the fringes of East Jerusalem.”

As has been the case in all its preemptive reporting (see ‘related articles’ below) on the topic of the as yet theoretical plan to apply Israeli civil law to parts of Area C, the BBC made no effort to provide audiences with the relevant background concerning that territory, including its allocation by the League of Nations for the establishment of a Jewish homeland and its occupation by Jordan in 1948. Instead, readers found the BBC’s standard mantra in which history begins in June 1967.

“After a meeting of the Palestinian leadership in Ramallah on Tuesday night, Mr Abbas said: “The Palestine Liberation Organisation and the State of Palestine are today no longer bound by all agreements and understandings with the American and Israeli governments, and by all the commitments derived from those understandings and agreements, including those relating to security.

“From now on the Israeli occupation authorities must bear all responsibilities and commitments toward the international community as an occupying power.””

Readers were not informed that were Abbas really to end “all agreements” that would include the one which established the Palestinian Authority that he heads.

The BBC’s portrayal of Abbas’ declaration focused mainly on the topic of security coordination but readers were not given any information concerning one potential result of the termination of those agreements, outlined as follows by Khaled Abu Toameh:

“If Abbas goes through with his threat to halt security coordination with Israel, that would mean an end to his efforts to prevent Iran’s Palestinian proxies, Hamas and Palestinian Islamic Jihad, from proceeding with their ambition of extending their control to the West Bank. By halting the security crackdown on Hamas, Abbas would be paving the way for terrorists to kill him and his associates in the West Bank, as they already began to do in 2007 in the Gaza Strip, and possibly again in a coup in 2014.

In recent years Abbas’s security forces have arrested hundreds of Hamas and Palestinian Islamic Jihad members in the West Bank as part of an effort to prevent these groups from undermining his regime. Israel, for its part, has been helping Abbas by routinely arresting Hamas members and officials who pose a threat to his government.”

The BBC closed its report with statements from the EU and the Jordanian king which it had covered in previous reports.

Readers have no doubt noticed that in all its generous coverage of the so far theoretical story of application of Israeli civil law to specific parts of Area C, BBC audiences have not been provided with a meaningful explanation of the historical background which would enable them to judge whether or not the corporation’s use of the term ‘annexation’ is appropriate and have not heard any viewpoints which differ from the Palestinian Authority’s position.