When the Coronavirus pandemic became the BBC’s lead story back in mid-March audiences saw a spate of reports warning of catastrophe in the Gaza Strip due to factors including population density, poverty and an inadequate healthcare system.

As we observed at the time, many of those reports promoted the false notion that the state of healthcare in the Gaza Strip is primarily attributable to counter-terrorism measures imposed by Israel and Egypt following the 2007 violent take-over of the territory by the terrorist organisation Hamas. Notably, the same messaging was promoted at the time in campaigns run by political NGOs.

Audiences were however not given any significant information on how infighting between Hamas and Fatah – along with Hamas’ prioritisation of terror over civilian welfare – has affected the standard of living and services such as water, power and healthcare in the Gaza Strip.

Fortunately, the BBC’s stark predictions did not transpire and that wave of reporting waned after several weeks. However messaging concerning healthcare in the Gaza Strip has not completely disappeared from BBC content.

On May 24th the BBC News website published a photo feature titled “In pictures: Muslims celebrate Eid al-Fitr amid coronavirus”.

“After a Ramadan marked by lockdowns and social distancing, Muslims around the world have begun celebrating Eid al-Fitr. […]

Traditionally, whole communities turn out to attend Eid prayers at their local mosques.

But with many countries still under coronavirus restrictions, Eid will look very different for many people this year.”

Among those eight locations, the place with the fewest cases of Covid-19 (55) and the lowest fatality rate (1) is the Gaza Strip. Nevertheless, the only photo caption which mentions the location’s death toll and health system was taken in Khan Younis, although the photo’s original caption did not include those topics.

“The densely-populated territory, whose health system was already under pressure before the pandemic, reported its first virus-related death on Saturday” 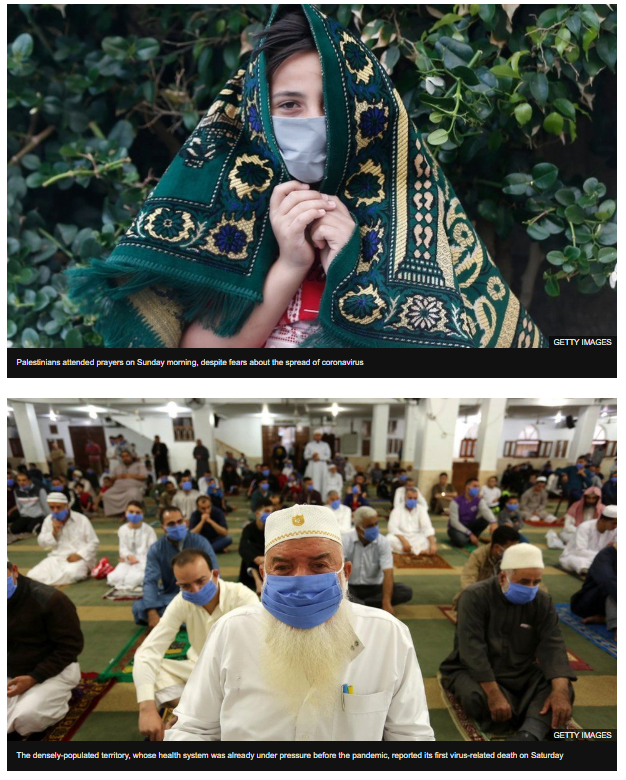 Nevertheless, the only health system which the BBC found worthy of comment was – predictably – that in the Gaza Strip.