Over the past two and a half months BBC audiences have seen no small amount of reporting about Israel and cell phone tracking to identify contact with Covid-19 carriers.

As documented here previously, between March 17th and April 30th, visitors to the BBC News website’s ‘Middle East’ page found reports relating to that topic on over half of those 45 days. Similar reports were aired on BBC World Service radio and on BBC Radio 4.

On May 12th the BBC News website published a fifth article on that topic – written by the BBC Jerusalem bureau’s Tom Bateman – which has now been available on the ‘Middle East’ page for 20 days. 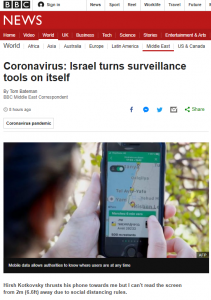 As noted at the time, Bateman provided readers with comparatively little information about the safeguards put in place and readers were not informed that on May 5th the Knesset subcommittee approved a three-week extension to the programme which, if not further extended, would expire on May 26th.

Ahead of that expiry date a cabinet meeting was held and, as reported by several international and local media outlets:

“[The] Israeli government on Monday voted to limit security services’ involvement in locating coronavirus carriers using cell phones, saying from now on the measure would only be used when epidemiological investigations prove insufficient. […]

The cabinet approved the emergency measure mid-March, following a COVID-19 outbreak in the country, which allowed Shin Bet to use surveillance technology in tracking coronavirus patients in an effort to limit their exposure to general public. […]

During the cabinet meeting on Monday, the government modified the regulations to make cellphone tracking available to officials only “in specific instances, when the places [where the carrier visited] cannot be verified by an epidemiological investigation.””

Notably, BBC News – which for over two months had amplified portrayals of the system as “hugely controversial”, “a dangerous invasion of privacy”, “highly questionable” and “a dangerous precedent and a slippery slope” – has not found it necessary to inform audiences of the new limitations brought in a week ago and Tom Bateman’s now out of date report remains on the BBC News website’s ‘Middle East’ page.

BBC NEWS ILLUSTRATES A REPORT ABOUT ISRAEL WITH AN IRRELEVANT IMAGE