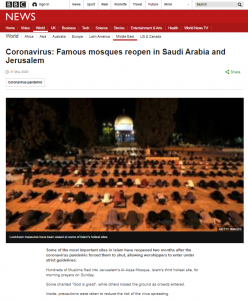 In the latter part of the report readers were provided with the names of the city and the country in which one of the two featured mosques had reopened:

“In Saudi Arabia on Sunday, there were similar scenes at the Prophet’s Mosque in the city of Medina, where worshippers gathered for prayers.”

However BBC portrayal of the opening of the other mosque, which was more extensively covered, included the name of the city  – but not the country – in which it is located:

Regular readers will be aware that the BBC has long refused to describe even those parts of Jerusalem which were not invaded and occupied by Jordan in 1948 as the capital city of Israel. We have previously documented the ahistorical ‘rationale’ behind that editorial policy, including the erroneous claim that “technically, West Jerusalem is not Israeli sovereign territory”.

The BBC’s editorial policy concerning the parts of Jerusalem which were belligerently invaded, occupied and later annexed by Jordan is outlined in its ‘style guide’. [emphasis added]

BBC journalists should seek out words that factually describe the reality on the ground and which are not politically loaded. Avoid saying East Jerusalem ‘is part’ of Israel or suggesting anything like it. Avoid the phrase ‘Arab East Jerusalem’, too, unless you also have space to explain that Israel has annexed the area and claims it as part of its capital (East Jerusalem is sometimes referred as Arab East Jerusalem, partly because it was under Jordanian control between 1949 and 1967). Palestinians want East Jerusalem as the capital of a future state of Palestine.

The BBC should say East Jerusalem is ‘occupied’ if it is relevant to the context of the story. For example: “Israel has occupied East Jerusalem since 1967. It annexed the area in 1980 and sees it as its exclusive domain. Under international law the area is considered to be occupied territory.”

Do not call East Jerusalem the Palestinians’ capital. You can say that Ramallah is their administrative capital and that East Jerusalem is their intended capital of any future independent state. This position was endorsed by the findings of a BBC Trust complaints hearing published in February 2013.”

The status of Jerusalem is one of the most sensitive and complex issues of the entire Israeli/Palestinian conflict. Its status is dependent on a final agreement between the Israelis and Palestinians.

Between 1949 and 1967, the city was divided into Israeli-controlled West Jerusalem and Jordanian-controlled East Jerusalem. But Israel currently claims sovereignty over the entire city, and claims it as its capital, after capturing East Jerusalem from Jordan in the 1967 War. That claim is not recognised internationally and East Jerusalem is considered to be occupied territory. Palestinians want East Jerusalem as the capital of a future state of Palestine.

The BBC does not call Jerusalem the ‘capital’ of Israel, though of course BBC journalists can report that Israel claims it as such. If you need a phrase you can call it Israel’s ‘seat of government’, and you can also report that all foreign embassies are in Tel Aviv. This position was endorsed by the findings of a BBC Trust complaints hearing published in February 2013.”

In other words, the core of the BBC’s editorial policy on Jerusalem is that while it insists that its staff “should say East Jerusalem is ‘occupied’” by Israel, it refuses to define what went before as occupation by Jordan and instead employs the euphemism “Jordanian controlled”. Absurdly, the corporation apparently believes that such an editorial policy is “not politically loaded”.

The part of the BBC’s report concerning al Aqsa mosque informed readers that:

Umm of course means mother in Arabic and the teknonym is used by women.

This BBC report bears a remarkable resemblance to an article published by Reuters earlier the same day in which readers find the following: [emphasis added]

“After they opened the mosque, I feel like I can breathe again. Thanks be to God,” Jerusalem resident Umm Hisham said through a face mask, her eyes tearing up, after entering the compound for dawn prayers with hundreds of other Muslims.

CAMERA UK contacted BBC Complaints in relation to that inaccuracy and swiftly received the following reply:

“Thank you for getting in touch about our article Coronavirus: Famous mosques reopen in Saudi Arabia and Jerusalem.
Please accept our apologies for the error.
We have since amended this sentence to now refer to how “…she walked into the mosque”.”
The article was indeed amended on June 1st.

BBC NEWS GETS ISRAEL’S CAPITAL CITY RIGHT – AND THEN ‘CORRECTS’

WHY DOES THE BBC TRUST’S ESC PRETEND THAT THE 1947 PARTITION PLAN IS A THING?