A Guardian article by Jerusalem correspondent Oliver Holmes (‘Palestinian lives matter’: Israeli police killing of autistic man draws US comparison, June 1) legitimises those exploiting the killing of George Floyd in the US to demonise Israel.   Though Holmes used others’ voices to advance such agitprop, he failed to challenge their claims or offer a quote from anyone critical of such facile and toxic comparisons.

A caregiver for an unarmed, autistic Palestinian man killed in Jerusalem by Israeli police has said she repeatedly warned officers he was disabled before they opened fire, in a case that has drawn parallels with US police violence.

The body of Iyad Halak, 32, was buried late on Sunday night. He was shot dead the day before, reportedly after becoming confused by shouting police and fleeing in a panic to hide among rubbish bins.

Israeli police said in a statement they had spotted a “suspect with a suspicious object that looked like a pistol”. “They called upon him to stop and began to chase after him on foot, during the chase officers also opened fire at the suspect, who was neutralised,” the statement said.

Holmes later noted the two Israeli officers “were questioned under caution..with one placed under house arrest while investigators looked into the incident”, and that Defence Minister Benny Gantz apologised for the incident during a cabinet meeting.

That both Halak and George were tragically killed by police, and both incidents have elicited understandable outrage, is of course not in dispute.  However, Holmes goes further than merely noting the two incidents, by advancing a narratives common amongst anti-Zionists and anti-Semites suggesting the Israeli-Palestinian Conflict is one between racist ‘whites’ (Israelis) and oppressed ‘people of colour’ (Palestinians).

Here’s how he does it:

The killing…has been pointed to by Palestinian, Israeli and US activists as an example of what they say is similar neglect for the lives of Palestinian and black people in Israel and the US.

At small protests in Israel and Palestine since Saturday, people held signs reading “Palestinian lives matter”, a reference to the US-based Black Lives Matter movement. Others posted online old photos of Israeli police and army officers kneeling on the necks of arrested Palestinian men – similar images to that of the death of George Floyd, whose killing while under police restraint has spurred protests across the US.

The Ramallah-based Palestine Institute for Public Diplomacy shared a drawing on Twitter of Halak and Floyd side by side, with “two countries, similar systems” written above them. “[Iyad] and George were victims of similar systems of supremacy and oppression. They must be dismantled,” the advocacy group said. 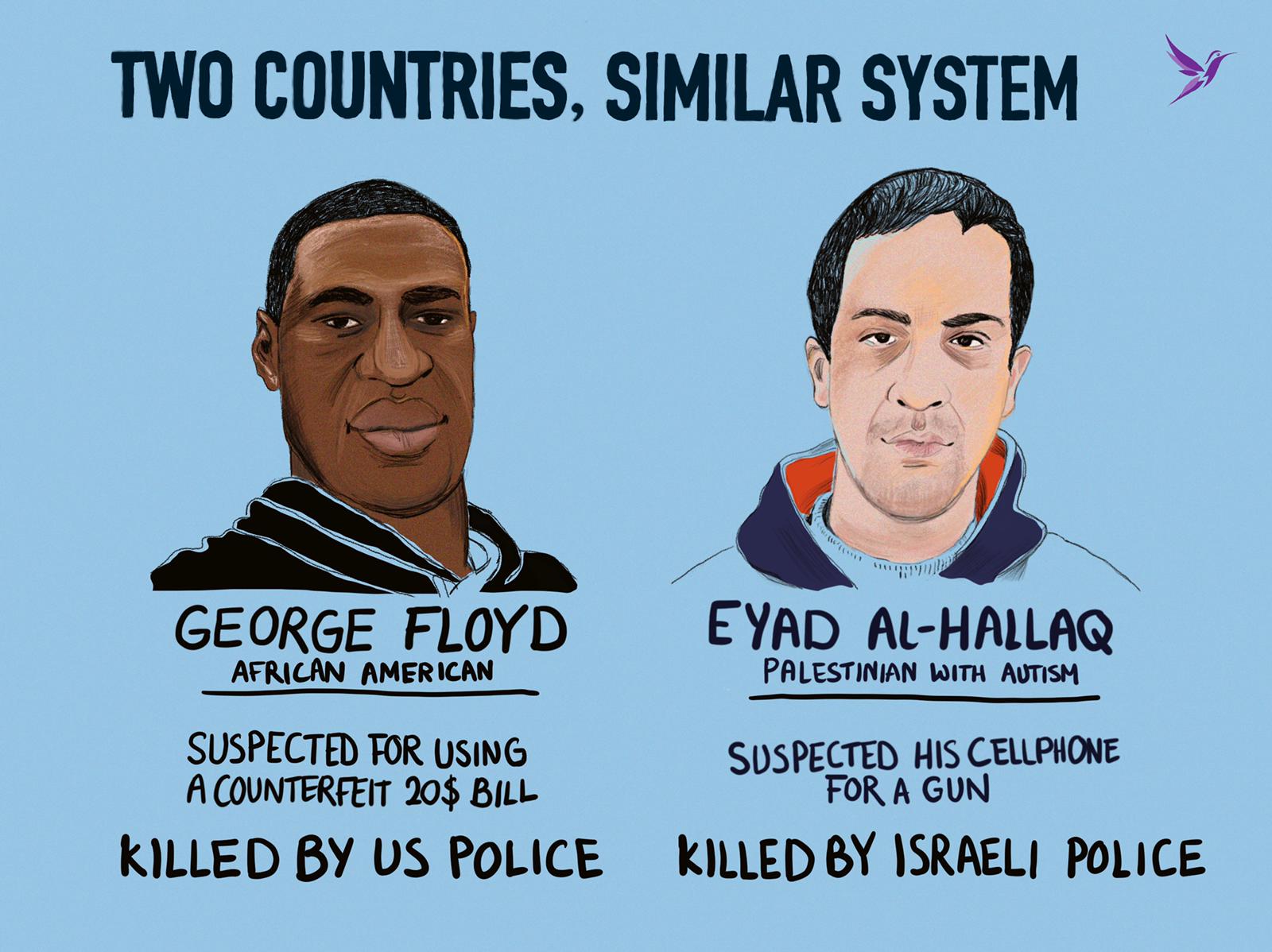 Gideon Levy, an Israeli columnist and one of the most prominent anti-occupation voices in the country, expressed little hope for an impartial investigation or that the killing – which he argued was not unusual – might lead to change in Israel and Palestine.

However, Levy isn’t merely an “anti-occupation voice”. He’s an anti-Zionist who has strongly suggested that Zionism in an inherently a racist endeavor – rhetoric deemed antisemitic according to the IHRA Working Definition. That is, Levy is an Israeli Jew used by hard-left publications like the Guardian to legitimise hateful views about the Jewish state.

“The [Israeli] border police are no less brutal or racist than the police in the United States,” he wrote in Haaretz newspaper. “There, they shoot black people, whose blood is cheap, and in Israel they shoot Palestinians, whose blood is even cheaper. But here, the killing puts us to sleep; there it sparks protest.”

By amplifying and failing to challenge the views of the Palestinian NGO and Gideon Levy, Holmes reinforces Guardian readers’ prejudices about the conflict as one between powerful Israeli whites (or white supremacists) and marginalized Palestinian ‘people of colour’ – counter-factual claims about the racial make-up of Israeli and Palestinian society that we’ve recently refuted.

Those advancing such propaganda on Twitter and elsewhere are cynically exploiting the death of the African-American Minneapolis man to stir up hatred of Israel.

Yet, such comparisons between the racial dynamics in the US and relations between Israelis and Palestinians are facile and intellectually unserious.

Black Americans were brought to the US in chains, and – even after slavery was abolished – endured another 100 years of racist-inspired oppression, degradation, violence and (de jure or de facto) discrimination.  Until the second half of the 20th century, and the success of the civil rights movement in outlawing codified racism, blacks had very little power to effect change.

Palestinian history in the region has no historical or moral parallels with the African-American experience.

Though Palestinian Arabs were, from the earliest Jewish return to the land in the 19th century, subjected to bad decisions by their leaders, who rejected any Jewish presence in the land, many if not most are willing participants in the decades of war, terror, incitement, antisemitism, and rejectionism that’s driven the conflict.  The conflict in general, and the occupation of disputed land in particular, isn’t fueled by race, but by the failure of two people to reach a political agreement on how to share the land.

The black civil rights movement in the US was overwhelmingly non-violent, and based, to this day, on co-existence and classical liberal principles of freedom and equality expressed in the US Constitution.  Martin Luther King often characterised his movement as one dedicated, by peaceful means only, to encouraging the country to fulfill the moral and political creed of the founders.

Can anyone articulate which fundamental political principles – other than a hostility towards Israel – inspire the current Palestinian movement, and, perhaps more importantly, what values would shape a future Palestinian state?

The overwhelming majority of blacks in the US don’t support violence to achieve their political goals. Nor do most harbor racist attitudes towards whites, regardless of how they feel about US racism. When black leaders say their community wants justice, they can be taken at their word.

Disturbingly high numbers of Palestinians, on the other hand, express support for violence, (including suicide bombing) whilst a staggering 93% harbor antisemitic views.

But, of course, to even have an honest discussion about the roll played by Palestinian racism and extremism in perpetuating the conflict would require assigning them agency, accepting that they’re not merely victims and that that their leaders’ choices (rejecting offers of statehood and embracing violence) impact Palestinian outcomes – ideas completely at odds with the Guardian’s hard left ideology.

The killing of George Floyd has absolutely nothing to do with Jews or Israel, and those in the media or elsewhere insisting on connecting the former with the latter are not driven by the desire for justice.  Rather, it represents a reflection of their own biases and personal moral blind-spots.

As Matti Friedman has written, “the Jews of Israel are the screen onto which it has become socially acceptable to project the things you hate about yourself and your own country”.  The international press has become, he added, “the tool through which this psychological projection is executed”.

Like Loading...
Tags from the story
George Floyd, Guardian, Israel, Iyad Halak, Oliver Holmes
Written By
Adam Levick
More from Adam Levick
Back in December we asked our loyal readers why they loved Israel and...
Read More