Last week, we published a post criticising an appalling letter to theeditor published in the print edition of The Journal – a newspaper based in Newcastle.

You can read the text of the letter in this post:

We argued that the letter clearly suggested that the treatment of Palestinians by Israeli Jews today demonstrates that Jews haven’t “learnt” from their history (that is, the systemic murder of six million Jews during the Holocaust), and are repeating crimes on par with Nazi atrocities.  We noted that this morally odious charge evokes the Nazis-Israel analogy deemed antisemitic by the IHRA Working Definition of Antisemitism.

A spokesperson for Campaign Against Antisemitism released the following comment:

“Equating Israeli policies to those of the Nazis is antisemitic under the International Definition of Antisemitism. Newspaper editors are under no obligation to print letters and, while letters do not necessarily represent the views of the editors, the choice to print an antisemitic letter reflects the editors’ ignorance of the manifestations of anti-Jewish racism. The editors must apologise to readers and clarify what steps are being taken to avoid a repeat in future.”

We complained to the paper’s managing editor and encouraged our supporters to the do the same.

After several follow-ups, they agreed to publish an apology: 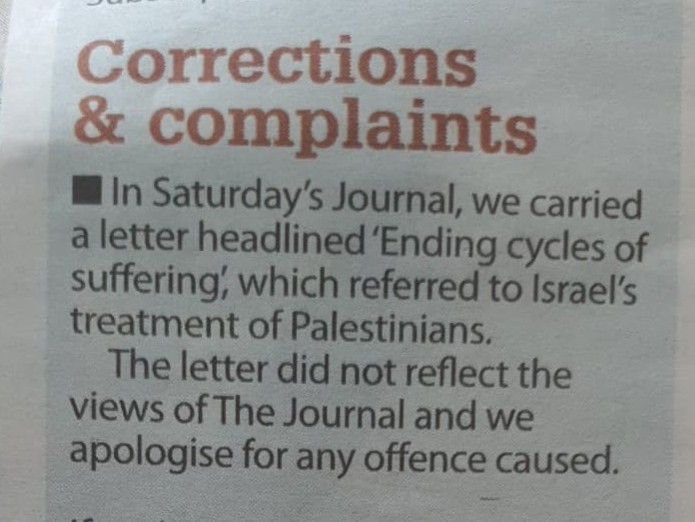 Though we would have preferred if they acknowledged that the letter included racist rhetoric, such mea culpas are extremely rare in the media, so we commend the managing editor for disavowing the views expressed by the letter writer and apologising for the offence.