The June 2nd edition of the BBC World Service radio programme ‘Outlook’ was titled ‘My part in a historic hostage rescue’. 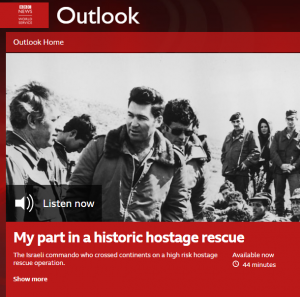 “In June 1976, an Air France flight from Tel Aviv to Paris was hijacked by militants. The plane and its 248 passengers were flown to Entebbe airport in Uganda, where all the Israeli and Jewish passengers on board were held hostage in an old terminal building. The hostage takers were members, or allies, of a Palestinian armed group, and the hijacking was tied to the on going Israeli-Palestinian conflict. Back in Israel, Rami Sherman, who was an officer in an elite military unit, started making plans to get the hostages back. The situation was challenging, and they knew they needed the element of surprise to pull off a rescue. The idea they came up with involved a low altitude flight across East Africa, and a fake presidential motorcade. Rami shares his story with Outlook’s Emily Webb.”

Like that synopsis, presenter Emily Webb avoided any use of the word terrorist and throughout the item the term was only mentioned by her interviewee and in an archive recording.

At no point were listeners were told the name of the terrorist organisation that carried out the hijacking – the PFLP.  In an archive recording listeners heard the inaccurate term “guerrillas” used to describe terrorists who had taken hundreds of civilians hostage.

“An Air France jet was hijacked by Palestinian guerrillas today. On board; 9 Americans, some 80 Israelis and 157 other passengers.”

Webb herself used the term hijackers. [emphasis in italics in the original]

Webb: “The plane was supposed to be flying from Israel to Paris but two Palestinian and two German hijackers armed with grenades took control.”

Webb [04:16]: “The hijackers wanted a ransom of 5 million US dollars for the plane itself and demanded the release of 53 Palestinian prisoners, mostly held in Israel.”

In fact, the term “Palestinian prisoners” is not an accurate description of a good proportion of the names on the terrorists’ list.

“Those whose release was demanded included 40 prisoners said to be held by Israel, among them Archbishop Hilarion Capuecci, serving a prison sentence imposed in December 1974 for arms smuggling, Mr Kozo Okamoto, the Japanese sentenced to life imprisonment after the 1972 Lod airport massacre and Mrs Fatima Barnawi, serving a life sentence for placing a bomb in 1967.

(ii) six from West Germany – Herr Jan-Carl Raspe, one of the accused in the Baader-Meinhof trial, Frau Inge Viett, Herr Raif Reinders and Herr Fritz Teufel, all being held in custody in connexion with the assassination in November 1974 of Judge Günter von Drenkmann and the abduction of Herr Lorenz, as well as Frau Ingrid Schubert and Herr Werner Hoppe, both serving prison sentences for attempted murder.

(iii) one from Switzerland—Frau Petra Krause, a German-Italian awaiting trial for explosives offences.

(iv) one from France – Sra Amparo Silvia Masmela, a Colombian said to be a friend of ‘Carlos Martínez’ but who, according the French authorities, had been released from prison in December 1975.”

Near the beginning of the item Webb told listeners that they were about to hear “some background” concerning her interviewee and when the conversation got to the stage of his enlistment in the army (02:24) she told audiences:

Webb: “The year was 1972 and the conflict between Israelis and Palestinians was ongoing. Twenty-four years earlier, many Palestinians fled or were expelled from their homes as Jewish families arrived after the establishment of Israel. In the tense years that followed, armed Palestinian groups formed.” [emphasis added]

As we see, Webb managed to completely whitewash the invasion of nascent Israel by five Arab armies from her “background” and create false linkage between the flight of Arabs and the completely unexplained arrival of “Jewish families”. As documented by our colleague Gilead Ini:

“…the Arab flight can be divided into two time periods corresponding with the two major phases of fighting. Roughly half of those fleeing did so between November 1947 (when Palestinian Arabs responded to the United Nations partition recommendation with anti-Jewish violence) and May 1948 (when the armies of Egypt, Jordan, Syria, Iraq and Lebanon invaded Palestine). During this period, the conflict more closely resembled a civil war, with Palestinian Jews battling Palestinian Arabs and several thousand Arab militiamen. A second phase of the fighting and flight occurred after May 1948, when neighboring Arab armies initiated the conventional phase of the war by joining in the fighting on the side of the Palestinians. […]

Historians agree that there was no single cause of the Arab flight from Palestine. In large part, the masses fled because they saw the Palestinian elite doing the same thing. In part, it was in response to exhortations by Arab military and political leaders that Palestinian civilians evacuate their homes until the end of the fighting. Vast numbers were simply fleeing the heavy fighting that surrounded them, or that they expected to soon disrupt their lives. In some instances, Palestinians were forced from their homes by the Jewish military.”

One particularly noteworthy aspect of this interview is the attempt made to present the operation to rescue the hostages held at Entebbe (but not the actual hijacking) as “controversial”.

Webb [20:25] “The raid had been controversial and questions were asked in the UN about Israel’s response. […] In Israel the raid was still seen as a huge achievement…”

In fact the UN did not merely ‘ask questions’ –  as the JTA reported at the time, a UN Security Council session was convened.

“The four-day angry debate at the Council ended with a stalemate last night after the African states withdrew their resolution that called for the condemnation of Israel for violating Uganda’s sovereignty, and a rival British-American resolution condemning hijacking and international terrorism received only six votes, three short of the number necessary for adoption.

The Africans withdrew their proposed resolution – jointly sponsored by Libya, Tanzania and Benin –after it became clear that the one-sided resolution would not receive the minimum nine affirmative votes needed for adoption. In addition, had the resolution received the required votes. It would certainly have been vetoed by the U.S.”

Emily Webb however chose to echo the sponsors of that anti-Israel resolution when she asked the person who took part in a mission to rescue Jews held hostage by terrorists and threatened with death merely because of their ethnicity:

[09:59] Webb: “Did you have any reservations about the operations? I mean, knowing that you’d be violating Uganda’s territory by taking part in it, by going into the country without permission.”

Mr Sherman’s response to that peak BBC question was “not really”.

As we have seen in previous BBC attempts to report on that hijacking and rescue operation, not only does the corporation have considerable difficulty telling that story accurately and without politically motivated euphemisms but its 2007 conspiracy theory promoting article on that subject is still available online.

Like Loading...
Tags from the story
Accuracy, BBC, BBC World Service radio, Emily Webb, Entebbe, Israel, Operation Thunderbolt, Outlook, PFLP
Written By
Hadar Sela
More from Hadar Sela
As regular readers will be aware, we have in the past raised...
Read More