As we all too frequently have cause to note on these pages, the BBC’s presentation of Israel-related issues predominantly uses a selective account of history which commences with the outcome of the Six Day War in June 1967.

BBC audiences are no doubt capable of reciting by heart the standard – but partial – mantra on ‘international law’ that the corporation promotes on a regular basis:

On the 40th anniversary of the Six Day War in 2007, the BBC’s Middle East editor Jeremy Bowen produced a series of radio programmes (still available online) in which, inter alia, audiences were told that:

“The legacy of 1967, military occupation and violent resistance, the unresolved refugee crisis and the competition for control of  land and water…lies behind most of the shameful brutal and tragic events I have witnessed in 16 years of covering the Arab Israeli conflict for the BBC.”

“It would be bad enough if the misery of the past 40 years was confined to the Palestinians and the Israelis. But now at the start of the 21st century, their war affects all of us.. It’s at the centre of the conflict between the West and the Islamic world… Ignoring the legacy of 1967 is not an option.” [emphasis added]

However the BBC has remarkably little to tell its audiences about a significant event that took place less than three months after that war ended.

“After the 1967 Six-Day War, Israel was — in Defense Minister Moshe Dayan’s famous phrase — “waiting for a telephone call” from Arab leaders. Israelis expected to hear that now, at last, their neighbors were ready to talk peace. Having escaped not only feared annihilation, but also winning a seemingly miraculous victory, Israel’s leaders did two things: They vowed not to return to the vulnerable armistice lines of 1948 and ’49 or to a divided Jerusalem, and yet to be “unbelievably generous in working out peace terms,” as Foreign Minister Abba Eban put it. In direct talks with Arab countries, “everything is negotiable,” he said.

But, as Maj. Gen. (later president) Chaim Herzog noted, “Israel’s belief that the war had come to an end and peace would prevail along the borders was quickly dispelled. Three weeks after the conclusion of hostilities, the first major incident occurred along the Suez Canal. […] 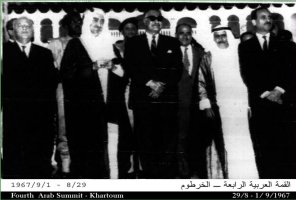 …the leaders of thirteen Arab states gathered at a summit conference in Khartoum, Sudan from August 29 to September 1. There they pledged to continue their struggle against Israel. Influenced by Nasser, “their conditions were quite specific: no peace with Israel, no negotiations with Israel, no recognition of Israel, and ‘maintenance of the rights of the Palestinian people in their nation.’ The Khartoum Declaration was the first serious warning to the Israelis that their expectation of an imminent ‘phone call’ from the Arab world might be a pipe dream”.”

Four years ago we documented the absence of any information concerning the Khartoum Resolution in BBC content, noting that:

“Next year will mark the fiftieth anniversary of the Six Day War and no doubt the BBC’s coverage of the topic will be extensive. Whether or not that coverage will finally include the provision of BBC audiences with information concerning the Arab League’s rejection of peace after losing that war remains to be seen.”

The BBC did indeed cover that anniversary extensively in June 2017 and its centrepiece was a 6,181 word article by Jeremy Bowen which he closed with repetition of his proclamation from ten years earlier that “Ignoring the legacy of 1967 is not an option”.

Readers of that lengthy screed found one paragraph on the topic of the Arab states’ rejection of peace.

“At a summit in Khartoum at the end of August, Arab states were in no mood to go cap in the hand to the country that had humiliated them, again. Arab leaders said there would be no negotiations, no recognition and no peace with Israel.”

Another June 2017 article – written by Paul Adams – likewise included a cursory reference to the Khartoum Resolution, along with a similar portrayal of “humiliated” (rather than defeated) Arab leaders.

“The Israeli cabinet held long, anguished discussions after the war about what to do with the territories now under its control. No formal peace offer was ever made and, at a summit in Khartoum in September 1967, humiliated Arab leaders declared there would be “no peace, no recognition and no negotiation with Israel.””

Adams’ claim that “no formal peace offer was ever made” fails to inform readers that a proposal was drafted by the Israeli government – and communicated to the Americans –  just over a week after the end of the war.

“At the end of the debate, a resolution was adopted unanimously, offering Egypt and Syria peace treaties based on the prewar international borders, with security assurances for Israel. This implied an Israeli willingness to withdraw from the Golan Heights and Sinai Peninsula, occupied during the war, in exchange for peace. It was further resolved that Israel would maintain its presence in territories currently held until peace is achieved. Following the Arab League’s Three No’s Resolution, in which it categorically ruled out the possibility of negotiations or peace with Israel, the Government of Israel repealed the offer in October 1967.”

Three years on, those two short paragraphs from Bowen and Adams – totalling less than a hundred words – remain the sole references to the narrative conflicting chapter in Middle East history called the Khartoum Resolution that the BBC’s funding public can find online.