After the BBC began to focus on the Coronavirus pandemic in mid-March, audiences saw no small amount of reporting concerning the perceived ability of health services in the Gaza Strip and the Palestinian Authority controlled areas to deal with the crisis.

Unfortunately, that coverage included the promotion of politicised narratives relating to healthcare in those two areas.

Contrary to BBC predictions, the health services in those two places were able to cope with the relatively low number of Covid-19 patients.

Interestingly, the BBC has chosen to completely ignore a related story concerning the Palestinian Authority (which is responsible for health services in both Areas A and B and the Gaza Strip) and donations of Coronavirus related aid.

On May 19th the United Arab Emirates (apparently in coordination with the World Health Organisation) sent 16 tons of aid to the Palestinian Authority.

“The UAE’s state-run WAM news agency issued a statement saying it delivered 16 tons of protective gear, medical items and ventilators “to curb the spread of COVID-19 pandemic and its impact in the occupied Palestinian territory.””

The PA however refused to accept that aid.

“The Palestinian Authority government has refused to accept medical aid from the United Arab Emirates after it arrived on the first known direct commercial flight between Israel and the UAE, PA sources told multiple Arab media outlets. […]

Palestinian media, as well as Russia Today Arabic, quoted a government source Thursday saying the aid had been rejected, explaining Ramallah was refusing to be used as a “tool for normalization” between Israel and the UAE. The two countries do not have diplomatic relations.

The source reportedly said the transfer of the medical aid had only been coordinated with Israel and the World Health Organization (WHO), and not with the Palestinian Authority which governs Palestinians in the West Bank.

That, the source claimed, indicated that the UAE intended to use the aid to improve its ties with Jerusalem on the “pretext” of aid to Palestinians.”

On June 9th the UAE sent a second consignment of aid. The Palestinian Authority once again refused to accept the donation. 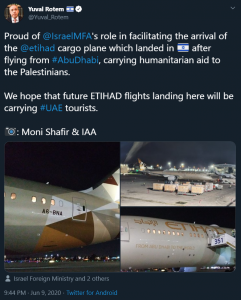 “The Palestinian Authority refused Wednesday a planeload of medical supplies from the United Arab Emirates to help fight coronavirus since it was coordinated with Israel rather than with them.

The Etihad Airways flight, which landed in Israel on Tuesday, was the second airborne delivery of humanitarian cargo by the UAE that the Palestinians say they have turned down in a month.

“We refuse to receive it because it was coordinated directly between Israel and them (the UAE),” Palestinian civil affairs minister Hussein al-Sheikh told AFP.”

According to the Times of Israel, while the UN originally intended to split the two shipments of medical supplies between the PA controlled areas and the Gaza Strip, they will apparently now be transferred to the latter territory.

“Once it clears customs and security checks, the aid will be dispatched to a holding terminal at the Ashdod seaport, where the first part of the shipment is waiting.

The decision to send the goods to Ashdod indicates they will likely end up in Gaza and not the West Bank. […]

…a UN official made clear to The Times of Israel that there was far greater need for the supplies in the Gaza  Strip.

The UN conducted an assessment of the ongoing medical situations in both territories where it operates extensively and determined that roughly 65 percent of the UAE shipment should go to the Hamas-ruled Gaza Strip while the remainder could go to the West Bank, the official said.”

Considering that three months ago the BBC aired at least five radio reports relating to the topic of the number of ventilators in the Gaza Strip, one might have expected to see some reporting on the arrival of that aid from the UAE. However as we know, the BBC has a record of avoiding informing its audiences about the Palestinian Authority’s own goals.