“Covid-19 has dominated the media for months. Meanwhile, away from the headlines, other stories are developing at speed – some intersecting with the virus crisis in unexpected ways.” 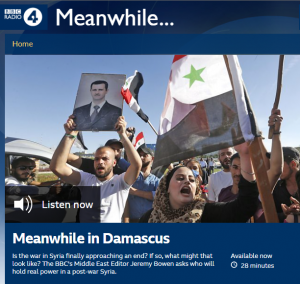 The June 15th edition of that programme was titled “Meanwhile in Damascus”.

“After nine long years of civil war in Syria, President Assad has regained large swathes of the country through a ruthless military campaign supported by Russia and Iran. The war has come at enormous cost both in lives lost and infrastructure destroyed. With Russia and Iran looking to cash in on rebuilding the country, the BBC’s Middle East Editor Jeremy Bowen examines who will hold real power in a post-war Syria. Already serious cracks are appearing at the very top. An unusually public dispute between President Assad and his first cousin, Rami Makhlouf, is causing alarm in Damascus. Makhlouf is Syria’s richest man, said by the US and the EU to have bankrolled the war for the regime. Russia is said to be getting impatient with President Assad over his reluctance to engage with a plan for post-war reconstruction. As the military campaign enters its final stages in the north of the country, can President Assad afford to fall out with the key people who support him?”

Among the contributors to the BBC Middle East editor’s programme was the Iranian regime loyalist Mohammad Marandi.  Seeing as Marandi is a fairly regular fixture at the BBC (see ‘related articles’ below), Jeremy Bowen should have been able to provide listeners with a more adequate introduction of his guest, which might have gone some way towards mitigating Bowen’s failure to challenge his propaganda. [emphasis in italics in the original, emphasis in bold added]

Bowen [19:15]: “I’ve been writing that the Syrian war is in its end game since at least 2018. It’s still true but now it looks as if the end game isn’t peace but indefinite years of bloodshed as Syrians and outsiders fight over what is left. The UN Security Council can’t help: it’s been deadlocked for most of the war. It’s still a war of foreign agendas. Syria’s old ally Iran was invited in, it says, to fight Sunni extremists. The Iranian leadership’s mindset, reflected by Mohammad Marandi from Tehran University, is very different to the West’s.”

Listeners were not told why the UNSC has been “deadlocked”.

Marandi: “The issue is fighting against extremism. It’s very clear now whether it’s an ally or a friend or a neighbour. The extremism that the United States, Saudi Arabia, Turkey, Qatar and others helped spread in Syria is the same sort of thing that they did in Afghanistan in the 1980s which created the menace of al Qaeda and the Taliban and ultimately led to 9/11. Or 7/7 in England.”

Bowen had nothing to say about those partisan portrayals of Syria and Afghanistan and made no effort to remind listeners of the role played by Iran in that latter conflict.

Bowen: “How come in your perspective then that the West has got it all so wrong?”

Marandi: “Because this colonial mentality and this sense of exceptionalism, which has existed for hundreds of years, continues to exist and therefore they give themselves exceptional rights and usually in the name of freedom and democracy, what they push for is to extend or expand their hegemony and to prevent countries from gaining independence. The United States never forgave Iran because of the revolution. That’s the problem.”

Bowen failed to bring up the relevant topic of Iran’s religiously motivated expansionist policies and hegemony.

Bowen: “Intervention has so far worked for Bashar Assad’s other main ally, Russia’s President Putin. He’s delivering victory and showing the Russian people that they’re back on the world stage according to Fyodor Lukyanov in Moscow.”

Earlier on in the programme Lukyanov had been introduced as the person who “edits the journal Russia in Global Affairs in Moscow and he’s an expert on Russian foreign policy in the Middle East”.

Listeners were not informed that the editor Lukyanov is also a leading member of a Russian ‘think tank’ created “pursuant to presidential decree” a decade ago. Had they been given that information they may have been able to put Lukyanov’s whitewashing of Russian attacks on civilian targets including hospitals in Syria – which have been described in a UN report as war crimes – into the appropriate perspective.

Lukyanov [21:43] “It seems that Russian leadership learned a lesson both from the Soviet Union and from Americans in the Middle East because despite all the problems the Russian military got in Syria it was never a full-scale landmark operation. Russian aircraft supported significantly but just supported the Syrian army. So I think the quagmire that was envisaged at that time did not happen.”

Bowen failed to challenge that partisan portrayal but listeners did hear about bombing by another country.

Bowen [23:49]: “Inside Syria is a collection of wars within wars. A well-defined end is impossible. It’s a boxing ring for Iran and Israel. The Iranians use it to get closer to Israel’s borders. Israel’s prime minister Benjamin Netanyahu has an arrangement with Vladimir Putin about hitting Iranian targets says Fyodor Lukyanov in Moscow.”

Lukyanov: “Russia would have a lot of opportunities to stop Israelis from doing what they do when they bomb targets in Syrian territory but in most cases – or in some cases – Russians let them go because they see that those strikes are understandable from a security point of view. If it is not from Russian point of view, from Putin’s point of view, then Putin said it to Netanyahu in a very blunt way and then it’s time for him – for Israeli prime minister – to accept these views.”

Bowen did not bother to inform listeners of the nature of the “Iranian targets” in Syria or why Iran wants to “get closer to Israel’s borders” and notably, listeners did not hear Hizballah mentioned at all in this programme.

One can of course question the value of inviting mouthpieces of totalitarian regimes to contribute to current affairs programmes, especially when the nature of their contribution is wholly predictable. That question however becomes even more acute when BBC journalists fail to comply with their own editorial guidelines on impartiality which stipulate that audiences should be informed of a contributor’s “affiliations, funding and particular viewpoints” and when no challenge is presented to their talking points.

ARE BBC AUDIENCES POSITIONED TO ‘JUDGE’ IRANIAN DENIALS OF ANTISEMITISM?

HALF A STORY TIME WITH THE BBC’S MIDDLE EAST EDITOR