We recently posted about a viral photo from a BLM protest in London that wasn’t at all what it seemed. 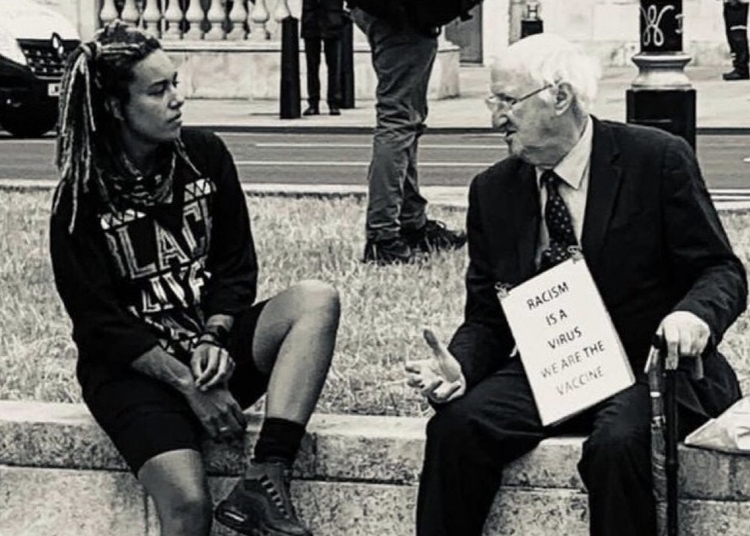 Whilst the photo, which inspired laudatory stories at ITV News and the Daily Mail, was framed as an inspiring, inter-generational conversation between two anti-racist campaigners, research by Community Security Trust (CST) revealed that the man on the right, Jim Curran, is not an anti-racist at all.

In fact, he’s deeply involved in an anti-Jewish hate group which peddles Holocaust denial and antisemitic conspiracy theories about Mossad and the Rothschild banking family.

As we reported at the time, following complaints on Twitter by activists over the gross misrepresentation of Curran, ITV News removed their online report, video and social media posts about the photo.  We then called on Daily Mail on Twitter to take similar action, and sent a complaint to editors accompanied by the CST report revealing Curran’s association with extremists.

We promptly received a reply thanking us for the information, and noting that they would pass on it on to the newsroom for consideration. 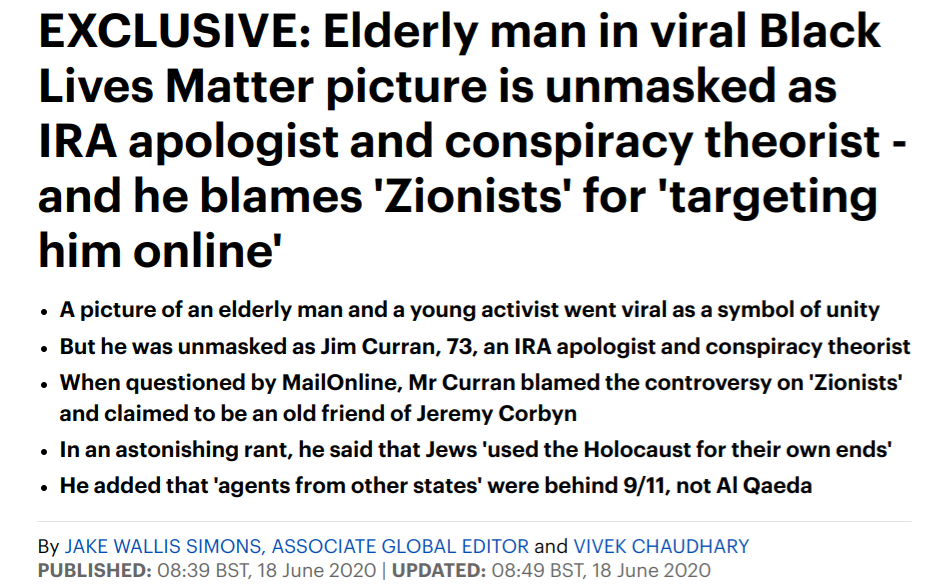 The report includes more information on Curran, and reveals that, when questioned by MailOnline, he blamed ‘Zionist’ for the row, attacked Jews and advanced other conspiracy theories:

The retired London Underground worker, who told MailOnline he was an old friend of Jeremy Corbyn, has long held IRA sympathies and supported conspiracy theories, such as that the poisoning of Sergei Skripal in Salisbury was a hoax.

And he has said that he believes that ‘agents from other states’ were responsible for the 9/11 attacks, not Al Qaeda.

Speaking to MailOnline last night, Mr Curran blamed the controversy over the picture on ‘Zionists’ who were targeting him online because of his ‘anti-racist’ views.

The Zionists are now trying to say that I’m anti-Semitic,’ he said. ‘Jewish people are being racist. They don’t like Irish Republicans and they are trying to demonise me.’

Describing his encounter with Ms Smith, he said: ‘I was telling her about history, that lots of bad things have happened to a lot of people, not just Jews.

‘What happened to a black people through slavery was also a crime and a Holocaust. This is what I’m trying to teach the new generation of activists.’

And in an astonishing rant, he added: ‘Other people play down their sufferings, but the Jewish people don’t. You have to ask yourself why.

‘They make more of what happened to them than anyone else. Jewish people have used the Holocaust for their own ends.’

We commend the Daily Mail for publishing the new article, which you can read in full here: