The subject of the report is a statement put out on the same day by a group of 47 people who are not UN employees but function as special rapporteurs, independent experts or members of working groups. The expertise of the majority of the signatories has nothing to do with the Arab-Israeli conflict. At the top of the list of signatories is Michael Lynk whose title is “Special Rapporteur on the situation of human rights in the Palestinian territories occupied since 1967” and who was appointed to that role in 2016 despite his long record of anti-Israel activity. 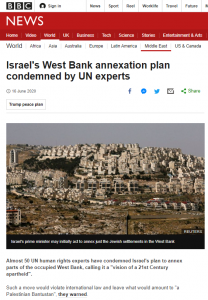 The BBC’s opening portrayal of that overtly political statement included a link:

Such a move would violate international law and leave what would amount to “a Palestinian Bantustan”, they warned.”

That none too subtle ‘apartheid’ analogy was repeated later on in the report under the sub-heading “What do the UN experts say?”.

“Israel has recently promised that it will maintain permanent security control between the Mediterranean and the Jordan River. Thus, the morning after annexation would be the crystallisation of an already unjust reality: two peoples living in the same space, ruled by the same state, but with profoundly unequal rights. This is a vision of a 21st Century apartheid.”

Readers were not provided with any information in the BBC’s own words concerning the relevance of the expertise of the people it repeatedly described as “UN experts”. Instead, they found a link to an update at an Israeli news website.

“There was no immediate comment from the Israeli government.

However, an unnamed Israeli diplomatic source told the Times of Israel that the statement “does nothing to help finding a solution to the conflict or to create a constructive dialogue between the parties”. The source also said that some of the experts “have nothing to do with the region or the rights the statement deals with”.”

The background to the story was presented under the subheading “What is the Israeli government’s plan?”. Of course no “plan” has yet been presented and in the event that the Israeli government should draw up a proposal, it could only begin the process of approval by the cabinet, the Foreign Affairs committee and the Knesset from July 1st.

The BBC’s portrayal of the “plan” which has yet to see the light of day is primarily based on speculation rooted in anonymous ‘reports’.

“Prime Minister Netanyahu says he wants to “apply Israeli sovereignty” to the parts of the West Bank which contain the Jewish settlements, as well as most of a swathe of land along the West Bank’s boundary with Jordan, known as the Jordan Valley.

Palestinians in the Jordan Valley will be exempt from annexation, and reports say the same exclusion will to apply to Palestinians in other annexed parts of the West Bank.

The areas earmarked for annexation (the precise contours of which are being mapped by Israel and the US) may comprise about 30% of the West Bank, according to reports.

Mr Netanyahu might initially act to annex just the settlements, which could amount to only 3%, and the remaining 27% later on once the boundaries are agreed with Washington.” [emphasis added]

“Until recently, Mr Netanyahu would have faced solid opposition among the international community to such a move. However, President Trump’s plan for peace between Israel and the Palestinians allows for Israel to “incorporate” the settlements – a radical shift from previous US positions.”

That latter claim is of course inaccurate and misleading; the Clinton Parameters of 2000 proposed that “Israel would retain settlement blocs containing 80 percent of the settler population”.

However since the outset the BBC’s portrayal of the Trump administration’s plan (which includes the January 2020 video by Jeremy Bowen recycled in this report) has been notable for the fact that it overwhelmingly amplifies the PLO’s position and talking points while airbrushing Palestinian refusals of previous proposals from audience view.

In addition, readers of this report found more general background which fails to meet the BBC’s supposed standards of impartiality.

“Israel has occupied the West Bank and East Jerusalem since the 1967 Middle East war.”

As usual audiences were not told that those areas were part of the territory assigned to the creation of a Jewish homeland by the League of Nations or that they were invaded and occupied by Jordan 19 years before the Six Day War. Neither were they informed that Jordan was warned to stay out of the 1967 conflict by Israel’s prime minister but instead chose to initiate the attacks which led to its defeat. To provide audiences with that information would of course oblige the BBC to explain why it exclusively uses the partial term ‘occupation’.

“It [Israel] pulled its troops and settlers out of Gaza in 2005, but the UN says its occupation there has not ended.”

The background to the UN’s stance on that issue can be found here.

“More than 600,000 Jews live in about 140 settlements in the West Bank and East Jerusalem. Most of the international community considers the settlements illegal under international law, though Israel and the Trump administration dispute this.”

The article also included a much recycled partisan map sourced from the political NGO B’tselem which, among other things, portrays the Jewish Quarter of the Old City of Jerusalem as a ‘settlement’.

The BBCs generous coverage of the topic of the potential application of Israeli civil law to parts of Area C throughout the past month has been overwhelmingly one-sided and partisan. In this report the BBC uses a statement put out by inadequately presented ‘experts’ as a vehicle for yet more promotion of its repetitive – and by now entirely predictable – messaging on that topic, while excluding any views that conflict with the corporation’s chosen framing and narrative.

BBC NEWS WEBSITE AMENDS A REPORT WITH AN INACCURACY