The purpose of BBC news and current affairs programmes is defined as follows:

“The BBC should provide duly accurate and impartial news, current affairs and factual programming to build people’s understanding of all parts of the United Kingdom and of the wider world. Its content should be provided to the highest editorial standards. It should offer a range and depth of analysis and content not widely available from other United Kingdom news providers, using the highest calibre presenters and journalists, and championing freedom of expression, so that all audiences can engage fully with major local, regional, national, United Kingdom and global issues and participate in the democratic process, at all levels, as active and informed citizens.”

Bearing that in mind, let us look at a segment from the June 22nd edition of ‘Hardtalk’ which was aired on the BBC News channel and the BBC World News channel, with an audio version broadcast on BBC World Service radio. 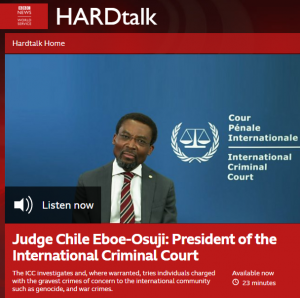 Sackur: “There was one other strong element to the US condemnation of the ICC just a few days ago that came from Secretary of State Mike Pompeo and that was your stance on launching an investigation into the Gaza war and the Israel-Palestine (sic) conflict.”

The remarks from the US Secretary of State to which Sackur apparently refers are reported here. Notably Sackur describes the 2014 conflict (Operation Protective Edge) as “the Gaza war”, thereby airbrushing the fact that throughout that conflict millions of Israeli civilians came under attack from terror groups launching thousands of missiles. Also notable is Sackur’s use of the word “Palestine” despite the instruction appearing in the corporation’s style guide.

Sackur [interrupts]: “Well excuse me but as far as I understand it your chief prosecutor has decided to launch a…to open a formal investigation into the violence in Gaza in 2014. She made that decision in December of 2019.”

Eboe-Osuji: “See what’s going on is this: the Palestinians referred the case to the ICC and the prosecutor decided to ask questions of the judges – a pre…even a pre-preliminary question – and the question being do we even have the jurisdiction to entertain this case. That is a pre-preliminary procedure…”

Eboe-Osuji: “Let me please, I need to finish this so people understand. It is a question of law that was provoked by the fact that there’s some dispute as to whether or not Palestine is a state and so that is a question for the judges and those who have legal submissions to make on that question of law are welcome to the cause, to make the argument. States have lined up, some states have responded to the call of the judges to…if you have any submission to make on this question of law, please come forward and make it. Some states have joint issues on either side…”

As we see BBC audiences hear two conflicting accounts. Stephen Sackur claims that the ICC’s chief prosecutor “decided to open a formal investigation” in “December 2019”. The ICC president claims that no investigation has commenced and that after the Palestinians referred the issue to the ICC, a “pre-preliminary procedure” was launched in order to determine whether or not the court has the jurisdiction to handle the case.

So which of those accounts is accurate? At the end of December 2014 Mahmoud Abbas signed the Rome Statute – the ICC’s founding treaty – and in April 2015 the Palestinians formally joined the ICC. The ICC’s chief prosecutor Fatou Bensouda had already opened a “preliminary examination” in January 2015. That process was described by the BBC at the time thus:

“A preliminary examination is not an investigation but a process of examining the information available in order to reach a fully informed determination on whether there is a reasonable basis to proceed with an investigation.”

Almost five years later, in December 2019, Bensouda announced that her preliminary examination had shown that there was a “basis” for proceeding with an investigation. However she also said that before launching such an investigation, she would ask the court to rule on the territory over which it has jurisdiction:

“However, given the unique and highly contested legal and factual issues attaching to this situation, namely, the territory within which the investigation may be conducted, I deemed it necessary to rely on article 19(3) of the Statute to resolve this specific issue.

Earlier today, I therefore requested from Pre-Trial Chamber I a jurisdictional ruling on the scope of the territorial jurisdiction of the International Criminal Court (“ICC” or the “Court”) under article 12(2)(a) of the Rome Statute in Palestine.

In March 2020 the process was delayed due to the Coronavirus pandemic. Meanwhile, “more than seven countries and more than 120 international organizations and independent scholars of international law submitted so-called amicus curiae (friend of the court) documents, offering their views on whether “Palestine” is a state that can transfer criminal jurisdiction over its territory to The Hague”. Those countries include Germany, Australia, Austria, Brazil, the Czech Republic, Hungary and Uganda.

At the end of April Bensouda announced that “the Prosecution has carefully considered the observations of the participants and remains of the view that the Court has jurisdiction over the Occupied Palestinian Territory”.

The issue now lies with the pre-trial chamber, which in late May “asked the Palestinian Authority to clarify PA President Mahmoud Abbas’s statement about terminating all agreements with Israel, and whether it applies to the Oslo Accords as well”.

In other words, Stephen Sackur’s claim that the ICC’s chief prosecutor “decided to open a formal investigation” in “December 2019” is only partly accurate because she conditioned the opening of that investigation on the ruling of the pre-trial chamber. The ICC president’s claim that no investigation has been launched is currently accurate, as are his statements concerning a “pre-preliminary procedure” in order to determine whether or not the court has the jurisdiction to handle the case. 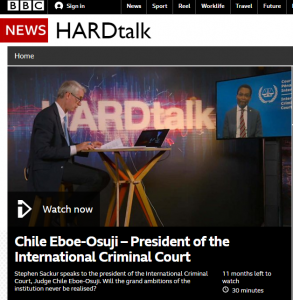 Sackur then went on to make another claim.

Sackur: “Judge, judge, forgive me for saying this but I need to keep this as simple as possible. The point surely is this: you and your fellow judges have decided to recognise Palestine as a state and as I understand it from the documentation you’ve said that the ICC has legal standing in Gaza, the West Bank and East Jerusalem. Now of course East Jerusalem was annexed by the Israelis after the ’67 war (sic) so are you saying that you recognise East Jerusalem as Palestinian sovereign territory?”

Eboe-Osuji: “Now this is difficult because I don’t know what you’re reading, where you’re quoting from. I normally as a lawyer and a judge, we do not allow, you know, materials like that to be introduced if you haven’t shown it to people you are addressing so they can verify….”

Sackur [interrupts]: “It’s not a complicated question though.”

Eboe-Osuji: “…one second….and context. So I do not know where you’ve got it that the judges have come to that. I do not recall any such judgement from this court.”

Sackur: “Well I looked at the documentation and as I understand it the ICC….”

Eboe-Osuji [interrupts]: “But you say, you said you and your fellow judges. I and my fellow judges, I have never said any such thing because I’ve never had that question presented to me to answer so I don’t know how you…where you get this from.”

Stephen Sackur’s reference to “the documentation” appears to mean the statement put out by the prosecutor Fatou Bensouda in late April. However as the ICC president correctly states, the court has yet to give a judgement on that issue.

The vast majority of listeners and viewers of this programme will of course not be familiar with the details that lie behind the topic of discussion in this part of the interview. The question that therefore arises is would their understanding be enhanced and would they be better positioned to “engage fully” as stipulated in the BBC’s public purposes after hearing it?

The answer to that question is clearly negative and the reason for that is Sackur’s all too apparent unfamiliarity with the details of the subject matter of his questions.

ON THE BBC NEWS ICC Q&A