On June 24th the BBC News website posted a video on its ‘Middle East’ page with the headline “Ethiopian Israeli minister: ‘We have a common struggle against racism’”.

An Ethiopian-born Jewish woman, she says the struggle of black people in her country is the same as all around the world.”

The video was originally produced for a BBC World News channel programme called ‘Focus on Africa’ and the interviewer is Peter Okwoche. It was also promoted on the BBC News website’s ‘Africa live’ page and on the BBC News Africa Facebook page where it prompted some offensive comments that have been left standing. 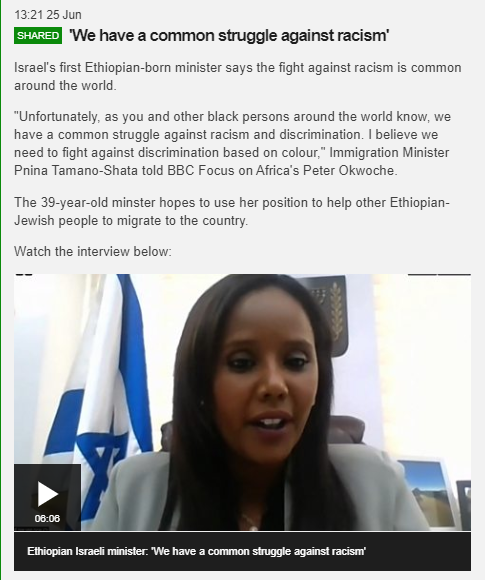 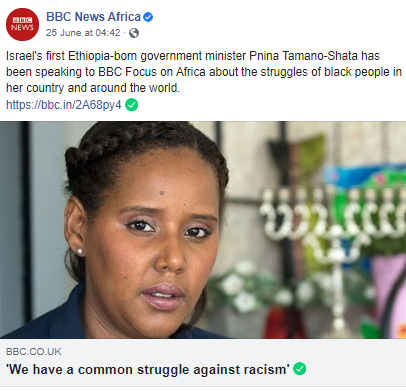 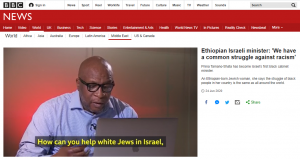 While Israeli citizens of Ethiopian origin may well suffer from racism or discrimination, they do of course have exactly the same rights as citizens of any other origin and to suggest that they do not materially misleads BBC audiences.

No less inaccurate and misleading is Okwoche’s reference to “white Jews”. The majority of Jews living in Israel are of Mizrahi or Sephardi origin or descent – i.e. they or their families came from Middle Eastern countries such as Yemen or Iraq or North African countries such as Morocco, Libya and Algeria. But not only is Okwoche’s suggestion that Israeli Jews who are not of Ethiopian descent are “white” inaccurate: the use of the term “white Jews” is in itself problematic because it negates Jewish history.

One would of course expect the BBC to avoid such tone-deaf stereotypes – particularly in an item supposedly about “a common struggle against racism”.